Situated between Oberlin Road and Graham Street, Oberlin Cemetery is a 3-acre site within the Oberlin community, once a thriving African American village located on Raleigh's outskirts. According to oral tradition, the cemetery originally acted as a slave burial ground. As Oberlin grew throught the late 1800s and early 1900s, the cemetery became the final resting place for several community pioneers and their children. Skilled stonecutters crafted many of the cemetery's 145 monuments. Oberlin cemetery remained active until 1971 when it reached capacity. Today it is one of four African American cemeteries in Raleigh and remains a visible testament to the city's largest freedman's community 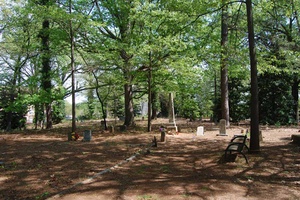