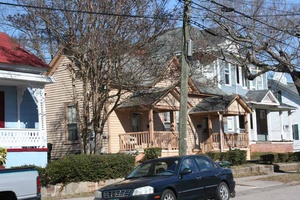 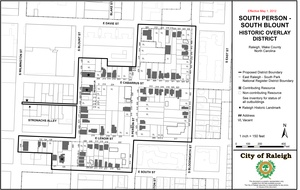 Located southeast of the Capitol within Raleigh’s original boundaries, the Prince Hall historic district includes a number of late 19th- and early 20th-century residences, as well as commercial and institutional buildings dating from the first half of the 20th century. The district encompasses about four city blocks and exhibits characteristics typically found in urban settings: streets that follow a grid pattern, narrow lots, and uniform setbacks.

One of the district’s oldest residences is the ca. 1855 Greek Revival/Italianate Rogers-Bagley-Daniels-Pegues House (a Raleigh Historic Landmark), purchased in 1919 by Dr. Albert Pegues, Shaw University’s Dean of Theology. Generally, however, houses are modest one- and two-story structures. Styles include Queen Anne and Triple-A shotguns, larger Queen Anne models, Craftsman and Craftsman/Colonial Revival hybrids, and Neoclassical and Minimal Traditional homes.

Residences were joined by churches, institutional buildings, and businesses, especially along South Blount Street, as the area grew over the decades. Notable examples include the 1907 Italianate Prince Hall Masonic Temple and the 1913 Gothic Revival Tupper Memorial Baptist Church, each Raleigh Historic Landmarks. Several smaller masonry commercial buildings dating from the 1940s and later can also be found along South Blount and throughout the district.

The African American community has lived, worked, socialized, and worshiped in the area since Reconstruction, as the establishment of Shaw University in 1865 attracted newly-freed slaves and other blacks. Additionally, the district is located a few blocks south of East Hargett Street, which was home to Raleigh’s African American commercial district during segregation.

Evidence of the historic mixed use nature of the district can be found through a few remaining densely packed segments—the 300 block of East Cabarrus Street, the 200 block of East Lenoir, and the south end of South Blount Street—and two alleys. Stronach’s Alley, bisecting the block bounded by South Wilmington, East Cabarrus, South Blount, and East Lenoir streets, was once lined with small homes. It was named after William Carter Stronach, a 19th-century Raleigh businessman who erected a tobacco warehouse and prizery in the area. The block itself hummed with activity and was home to and a church, hospital, movie theater, and cotton warehouses. Small residences also existed along Regan Alley, stemming off East Cabarrus Street between South Person and South Blount.

The district’s significance as a place of local African American culture, its progression of architectural styles, and its development as a mixed use neighborhood help it maintain a strong sense of history and place today. 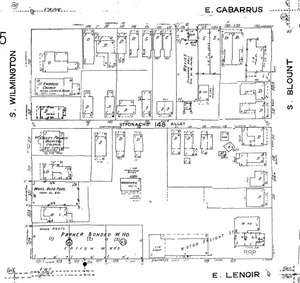