Collection of the City of Raleigh

Asheville artist Harry McDaniel used the cardinal (North Carolina's state bird) as a springboard for developing his unique sculpture design for Redbird. Installed at Raleigh's Fletcher Park in 2007, Redbird is located near the corner of Glenwood Avenue and Washington Street.

At first glance, Redbird gives the impression of giant flowers swaying in the breeze, but as viewers move around the piece, they notice the red tops are not flowers-like shapes, but irregular and angular segments that form the shape of a cardinal mid-flight.

McDaniel's piece was selected through a call for entries that was juried by Raleigh's Public Art Committee. The funds to support the project came from revenues from Red Wolf Ramble, which generated money specifically to be spent on outdoor public art. Redbird's unveiling was part of the Raleigh Arts Commission's 30th Anniversary Celebration. 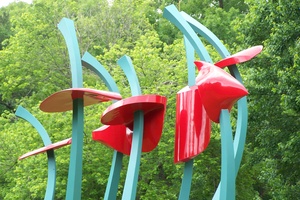 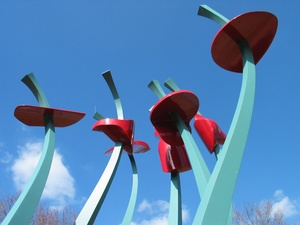 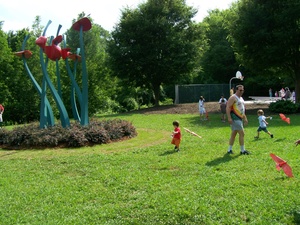