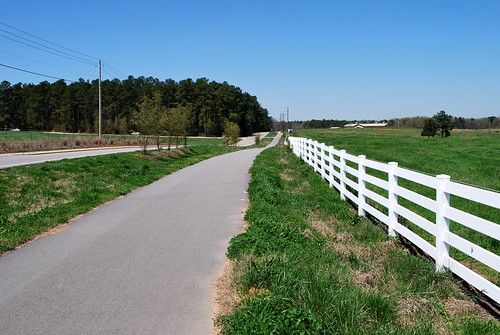 photo courtesy of twbuckner The Reedy Creek Greenway is a paved multi-use pathway accessible for non-motorized use on the west side of Raleigh. The greenway connects the Umstead State Park with the NC Museum of Art, with views of the NC State University horse farms and Schenck Forest along the way, ultimately crossing over I440 and to the Meredith College campus. The Reedy Creek Greenway was completed in several phases, with the final project completed in 2006.

When using the greenway, whether on foot or by bike, you can continue through Umstead State Park via the Reedy Creek Trail and cross over Interstate 40 to access either Lake Crabtree County park or the Black Creek Greenway, which is tied into the town of Cary's greenway system. Lake Crabtree has an extensive network of single-track trails for mountain bikers, as well as picnic and boating facilities.

On the art museum side of the greenway, users are treated to outdoor artworks by many artists such as Gyre by Thomas Sayre, Crossroads by Martha Jackson-Jarvis, and the Wind Machine by Vollis Simpson. But you have to visit frequently as many works are temporary. A two-story tower of old newspapers, "To see Jennie smile" (Steven Siegel) and the stickwork "Trail Heads" by Patrick Dougherty have been removed. 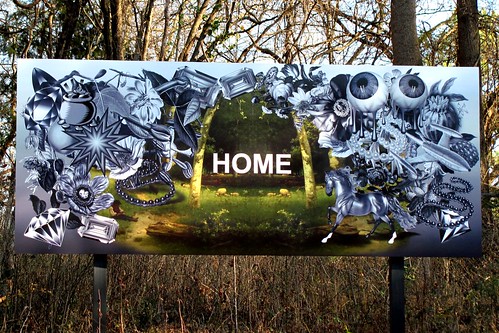 The image on the left, Home by Nancy S Baker, was part of a series of three images along the greenway that are replaced about every year or so.

In 2005, the greenway received and Environmental Excellence Award from the Federal Highway Administration (FHWA) for Excellence in Non-motorized Transportation. That same year, the bridge on the greenway that crosses of Interstate 440 and into Raleigh received a Sir Walter Raleigh Award for Community Appearance from the Raleigh Appearance Commission. 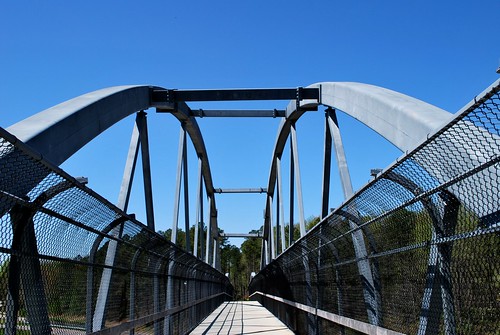 Bike/Pedestrian Bridge over I440 (photo courtesy of twbuckner)

The greenway ends as the user exits the Meredith College campus at the corner of Hillsborough and Gorman Street. If you cross Hillsborough Street and move south on Gorman Street, the Rocky Branch Greenway starts by taking a left and the next traffic light.