South Saunders Street is a major north and south roadway traveling across the southern portion of Raleigh. Much of the roadway carries the US 70/401 and NC 50 concurrency out of Downtown Raleigh. 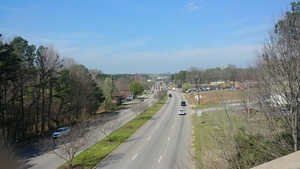 The roadway then turns to the northwest while US 70/401/NC 50 continue northeast into Downtown via Dawson and McDowell Streets. Saunders Street continues north as a four-lane undivided road through commercial development, passes under Western Boulevard, and enters Downtown Raleigh. The roadway reduces to two lanes at South Street, after which it converts to a one-lane, one-way southbound roadway at Lenoir Street, ending at Cabarrus Street near the former location of the Raleigh Amtrak Station.

As part of the Wake Transit Plan adopted by GoTriangle in 2016, South Saunders Street is one of two corridors being considered for the implementation of bus rapid transit routes running from Downtown Raleigh south to Purser Drive in Garner. Utilizing dedicated bus lanes, the project seeks to reduce traffic congestion  along the corridor. It is unknown when work is expected to begin.