Located on St. Augustine's College campus, St. Agnes Hospital first opened its doors in October 1896 and served as a hospital and nurse training center for African Americans. The hospital was expanded in 1903 to include new facilities, including an operating room. A 1904 fire severely damaged the building, prompting students of the college, under the direction of Reverend Henry Beard Delany (North Carolina's first African American Episcopal bishop) to quarry and lay the stone that makes up the current structure. Construction began in 1905; the cornerstone and electric lighting were installed in 1906. The completed hospital was ready for occupation in June 1909. Its straightforward and functional design includes granite walls laid in random ashlar and segmental-arched windows of various sizes.

By the 1920s, St. Agnes hospital was the largest hospital for blacks between Atlanta and Washington. In the 1940s the college and school separated; in 1961 the hospital closed when the Wake County Medical Center opened. The property was returned to St. Augustine's shortly thereafter. St. Agnes Hospital was declared a Raleigh Historic Landmark in 1979.

The first black heavyweight champion of the world, Jack Johnson, died at St. Agnes Hospital because they lacked the technology that could have saved his life 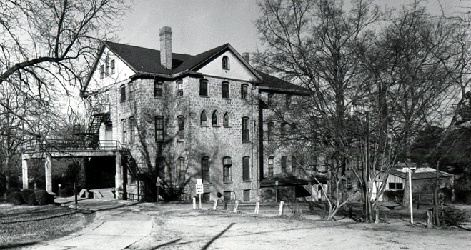 Photo from the State of North Carolina Archives