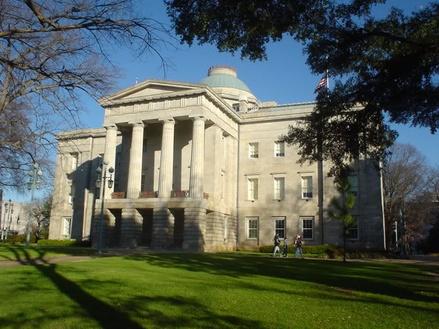 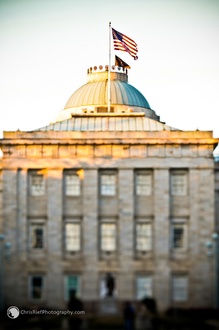 Built to replace the original capitol building, which burned in 1831, the North Carolina State Capitol is one of America's most important neoclassical structures. Three outstanding nineteenth century architects, Alexander Jackson, Ithiel Town, and David Paton designed this copper-roofed, roughly cruciform-plan building. The cornerstone of this Greek Revival masterpiece was laid in 1833 and the building completed in 1840. The granite used in its construction was excavated from a local quarry.

The main entrances have projecting porticoes of Doric columns elevated on a one-story high base, indicating that the legislative chambers are at this level. The Fayetteville Street facade has pilasters instead of columns, and the whole is unified by the entablature (a cornice, a frieze of alternating triglyphs and metopes, and an architrave) that wraps around the building.

Chambers originally used by the state senate and house remain intact. The building now houses offices for the governor and secretary of state. Guided tours are offered.