Featured in The Raleigh Museum as a business that built Raleigh, the Mecca Restaurant is an established Raleigh landmark. Simply put, if you haven’t been to the Mecca, you haven’t been to downtown Raleigh. The original neon sign still serves as a beacon to those looking for some great comfort food. Catering to the downtown work force, the Mecca has a loyal base of regular customers. The Mecca is much more than good food. The Mecca truly has its own personality and charm. The cherry booths are the same ones that you would have been seated in at the Mecca in 1930. The restaurant has survived downtown renovations, a fire, and the exodus of most of downtown’s original established businesses. Many establishments have come and gone, but the Mecca has managed to resist much change and that, in large part, is the beauty of the place. 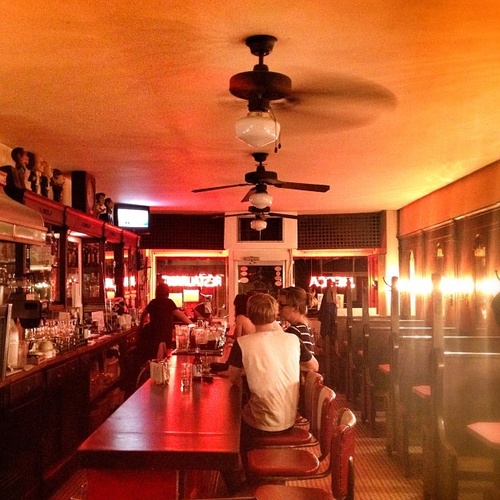 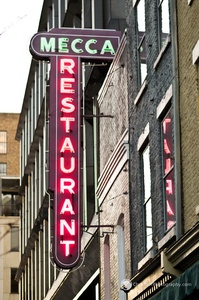 Nick Dombalis - The Mecca Luncheonette first opened its doors on the corner of Fayetteville Street and Hargett Street in downtown Raleigh in 1930. The original owners were Nick and Helen Dombalis. Nick Dombalis, a Greek immigrant, was known for his tough work ethic. Even after he turned over day to day operations to his son John and wife Floye in the 1950s, it was not unusual for “Mr. Nick” to be behind the cash register during lunch.

John Dombalis - Until his death in 2002, John Dombalis was at the Mecca every day. A gregarious, likeable individual, he never knew a stranger. He often quipped and had nicknames for his customers like “Sunshine” and “Squire.” John Dombalis loved partaking of the latest political goings-on. If the Mecca walls could talk, many a political secret would be revealed. John’s clam chowder and his homemade rice pudding were among his culinary specialties. In later years, John Dombalis developed the Glorified Hamburger which has become a favorite of many. The special sauce and the all-beef, charco-broiled hamburger patty on a sesame bun will rival any hamburger anywhere. John’s trips to the Farmer’s Market yielded fresh local produce that delighted the patrons.

Today - The Mecca is now operated by the 3d generation Dombalis. John and Floye’s son, Paul, now runs the Mecca. Paul has provided steady leadership for the Mecca since the 1980’s. Although, he still does business the old-fashioned way (he won’t accept credit or debit cards), he has made some innovative additions to the menu and has added outside seating. Floye’s beautiful smiling face still greets guests every day. It doesn’t take long for a new Mecca customer to realize that Floye is the sine qua non of the Mecca. The Mecca’s longevity is in large part attributable to her warm welcome and her guiding management of the Mecca’s operations through the years