Named for former North Carolina Governor William Bradley Umstead, William B. Umstead State Park covers 5,579 acres. Umstead park is accessible from US70 and Glenwood Avenue and borders Raleigh-Durham International Airport to the west. The Reedy Creek Greenway connects the park to the North Carolina Museum of Art. The main gravel bike and bridle trail that runs through the park is a continuation of Reedy Creek Road. 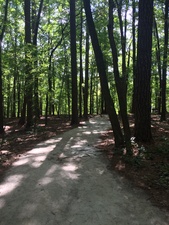 Long before the first settlers, the area now known as William B. Umstead State Park was an untamed land. American bison, elk, bobcats and wolves roamed majestic forests of oak, hickory and beech. Native Americans later inhabited the land and avenues of trade were developed nearby. Such avenues included the Occoneeche trail to the north and the Pee Dee trail to the south. In 1774, land grants opened the area for settlement.

Forests were cleared as agricultural interests sprouted. While early farming efforts were successful, poor cultivation practices and one-crop production led to depletion and erosion of the soil. During the Depression, farmers made futile attempts to grow cotton in worn-out soil around Crabtree Creek.

In 1934, under the Resettlement Administration, federal and state agencies united to buy 5,000 acres of this submarginal land to develop a recreation area. The Civilian Conservation Corps, as well as the Works Progress Administration, helped construct the site while providing much needed jobs. Four camps along with day-use and picnic facilities were built and the park opened to the public in 1937.

The state purchased this area, known as Crabtree Creek Recreation Area, for $1, and more facilities were built as the General Assembly made its first state parks division appropriation in the 1940s. In 1950, more than 1,000 acres of the park were established as a separate park for African-Americans. This area was named Reedy Creek State Park. Crabtree Creek Recreation Area was renamed a few years later after former Governor William Bradley Umstead because of his conservation efforts. In 1966, the Crabtree Creek and Reedy Creek areas were united under the same name; William B. Umstead State Park was open to everyone.