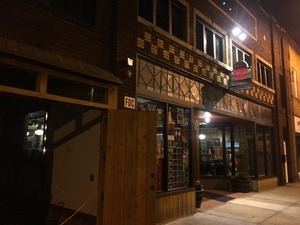 Four Saints Brewing Company, Randolph County's first brewery, is on Fayetteville Street in Asheboro, North Carolina. Four Saints Brewing Company is a craft brewery located on South Fayetteville Street in Asheboro, North Carolina. It is the first brewery to open in Randolph County after residents of Asheboro voted in 2008 to allow the sale of alcohol for the first time in almost 60 years. Four Saints officially opened for business on  May 6, 2015 in a renovated historic building that once housed an automobile dealership.

Four Saints began as a hobby among friends. Andrew Deming and Joel McClosky met in 2008. They began a friendship which would originate around a love of beer and brewing. Andrew, a homebrewer, offered to help Joel learn the techniques necessary to brew a beer of his choosing. For his first foray into brewing, Joel chose a stout. Eventually it would become the anchor beer of their company, Stout One. With a successful brewing behind them, they began imagining what it would take to to open a brewery. The friends continued brewing and honing their craft when one of them ran across an article about the "four patron saints of beer and brewing." From that point, Four Saints Brewing became a goal instead of a concept.

A few years went by and the friends continued perfecting their brewing techniques. Andrew developed additional beer recipes and Joel worked on the business plan for the company. A Kickstarter campaign was created in 2012 to help raise funds to open the brewery. People who contributed to the campaign were  awarded various incentives based on their giving level. The campaign ended on July 1, 2012 with 263 backers generating total funds of $52,375 of a $45,000 goal. Plans were set in motion to narrow down the location of the brewery.

Joel and Andrew explored various locations in the downtown district of Asheboro before choosing the E.L. Hedrick Buick Motor Car Co. building (served as Western Auto store, pool hall, Mexican bakery, among other entities). The building traced its roots to the early 1900s as an automobile dealership and mechanic's shop. After extensive renovation and upgrade of the building to accommodate their brewing and serving needs, Four Saints Brewing Company opened on May 6, 2015.

Four Saints Brewing Company is still the only brewery in Randolph County, NC. With an extensive menu of beers, Four Saints continues to develop and explore new frontiers of brewing. It has become an integral part of the county as it seeks out new methods of bringing business into the area. From promoting bands to sponsoring community events, Four Saints has integrated into Asheboro as both a community leader and a local gathering place for a variety of outlets.