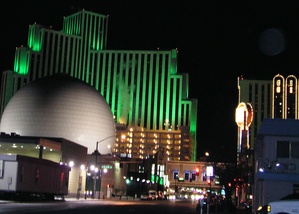 Many famous movie scenes are filmed in the heart of Reno, downtown. Courtesy of FreeTruman on Flickr.

Plenty of directors and producers have chosen to film their movies and television shows right here in Reno. Reno tends to be the hot Hollywood spot nowadays for movies that want to include old casinos, an old Vegas look, and for great nature spots around Tahoe. However, in old Hollywood, Reno was used for plenty of movies that showcased divorce as one of the main themes of the film. Reno was once known as the place to get a fast and easy divorce, so it was only natural that Hollywood leaned towards the location for their popular films. In this wiki page, you can find a list of movies, TV shows, and music videos that were filmed in Reno along with links to scenes where Reno can be seen.

The Misfits: This 1961 movie stars famous actor Clark Gable and the classic Marilyn Monroe. You can spot downtown Reno plenty of times in the movie, along with nearby Pyramid Lake. Monroe is seen in the film shortly after she filed for a divorce in the Washoe County Courthouse, in downtown Reno. To prove she is fully over the divorce, she tosses her wedding ring in the Truckee River located downtown. The scene with shots of downtown Reno, the courthouse, and the Truckee can be seen here. 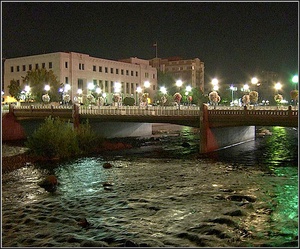 This area of the Truckee is located downtown and can be seen in the part of The Misfits where Monroe throws her wedding ring into the river.

Pink Cadillac: This famous 1989 Clint Eastwood movie takes a journey through Northern Nevada. Filmed in Fallon, Carson City, Fernley, and Reno, you can see some of their scenes at the John Ascuaga's Nugget in Sparks and around downtown Reno near the Reno Arch. Coincidentally, they held their world premiere release here in Reno at Harrah's. There currently aren't any videos on the web that contain these scenes, but we'll update this page for you the second we find one!

Kingpin: Famous actors, Woody Harrelson and Randy Quaid, star in this 1996 comedy playing bowling for money. The final face-off at the end is filmed at Reno's National Bowling Stadium, located  in the heart of downtown Reno. In certain hotel scenes, you can also find shots of the Silver Legacy.

Sister Act: Filmed in 1992, this Whoopi Goldberg classic is filmed primarily at a convent in San Francisco. However, in this movie, the entire convent picks up and travels to Reno to save Deloris (Goldberg) and another nun after they were kidnapped. At about 4:39 in this video, you can see the interior of a Reno casino in the background.

Love Ranch: This movie was filmed recently in 2010 and is loosely derived from the life of the Mustang Ranch brothel owner. This film includes the famous Joe Pesci and Helen Mirren and has scenes located at the brothel itself, as well as shots in downtown Reno near the Arch. You can find the trailer for this film right here.

The Muppets: The 2011 blockbuster hit features a scene where Fozzie Bear is a washed up comedian at the Bonanza casino here in Reno. The crew filmed shots of the actual casino with a changed name and uses interior shots of the casino as well. You can catch the scene here!

The Cooler: This movie was filmed in 2003 and features actors Alec Baldwin, Maria Bello, and William H. Macy. The entire movie is primarily based in Las Vegas, Nevada. However most of the scenes include the interior of what used to be the Golden Phoenix Casino in Reno as the interior for their hotel the "Shangri La." The Golden Phoenix is now known as high rise condos on North Sierra called The Montage.  You can see the Golden Phoenix in most every casino scene, but here's just one example.

Blind Fury 1989 TriStar Pictures, Inc.  Blinded and left to die in Vietnam, Nick Parker (Rutger Hauer) has been missing in action for more than two decades. Finally home, he sets out to find and forgive his old Army buddy, Frank Deveraux (Terrance O'Quinn). Forced to cook up designer drugs for a corrupt casino boss, Deveraux talks, putting his ex-wife and son in danger. Caught in the middle and with henchmen in close pursuit, Nick uses his highly tuned senses to escape in an action-packed cross-country battle.

Steel The Sky An Israeli agent entices an Iraqi jet pilot to defect with his MIG fighter.  Directed by John D. Hancock. With Mariel Hemingway, Ben Cross, Sasson Gabai, Nicolas Surovy. the majority of this film was shot at the Reno-Stead Airport.

Things Change  1988 Columbia Pictures Industries, Inc. Jerry is a low-level mobster whose wise-guy attitude has gotten him in trouble with the top brass. Now he has the chance to redeem himself by keeping an eye on Gino, an old shoeshine man who has agreed to take the rap for a murder committed by a big-time Mafia chief in return for his dream of owning a fishing boat. What follows is a comedy of errors and misadventures.  A good portion of the movie was shot in Lake Tahoe.

"Good Luck Charlie": This popular Disney television show has an episode the oldest brother PJ, starts work at a University. Some of the beginning shots include University of Nevada sightings, most primarily, a still frame of the Knowledge Center and includes a student skateboarding past Lombardi Recreation Center.

Fun Fact: Contrary to popular belief, the popular TV show "Reno 911" was not filmed anywhere in or around Reno.

"Drive Slow" - Kanye West: The famous rapper filmed nearly 3/4 of the music video in a car driving down a mesh of downtown Reno and the Fremont Street Experience in Las Vegas. You can see shots of the CalNeva, the Reno Arch, and the Silver Legacy prominently in the video.

"Little Motel" - Modest Mouse: This indie rock band produced a heart-wrenching video about a sick child losing his life. The entire music video is filmed in reverse, so that in the end it does not seem like the child died. The viewers can see very apparently the CalNeva sign and the neon lights of downtown Reno in the first few seconds of the music video.

"Take Me Home Tonight" - Eddie Money: Forever known as an eighties classic, the entire music video is shot at an empty stage. You may recognize the surroundings as University of Nevada's very own Lawlor Events Center.

Movies Made in Reno - About.com

All videos taken from Youtube.com