Fort Wetherill is a Rhode Island state park in Jamestown, on the southeastern corner of Conanicut Island. It is best known as a recreational area that includes a boat ramp, a small family beach and a very small, hard to access, rocky beach. The park also includes picnic areas. 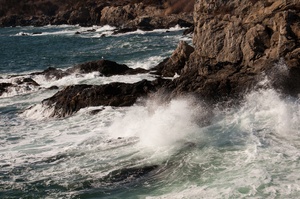 Except for the boat ramp and adjacent family beach, the coastal area features rocky cliffs. On the ocean-facing side, small crevices or fjords create spectacular plumes of whitewater spray in large surf. The largest of these crevices is a popular cliff-diving location, although this activity is technically illegal.

The boat ramp and family beach are situated at the back of a cove that sees relatively small waves, even though it faces Rhode Island Sound and the Atlantic Ocean. The small, rocky beach sits on a smaller cove just inside the entrance to the main cove and faces the boat ramp. Even in fairly large surf, this beach remains placid. One cliff on the inland side of the smaller cove is known as a prime cliff diving location.

Because it is both directly off the main ocean and also protected yet also geologically impressive above and below the waterline, Fort Wetherill is a prime location for scuba diving. The rocky, ocean-facing coast also attracts surf-casting angler. 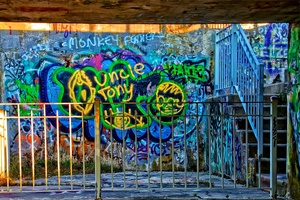 Add a captionThe military installations at Fort Wetherill date to the American Revolution. Rebelling colonists created the artillery fortification to guard the eastern entrance to Narragansett Bay, protecting Newport (then Rhode Island's largest and most important city) from British attacks. The installations were improved through WWII after which they were abandoned. The land became a state park in 1972,

Today, the fort ruins are covered in graffiti and graffiti art, representing the best and worst of this modern form of visual expression.