The Rhode Island government, like most governments in the United States, uses the tripartite form, consisting of three branches: executive, legislative and judicial.

Back to Rhode Island Overview 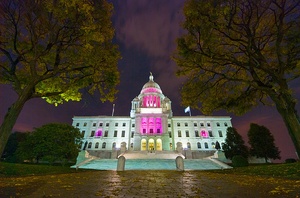 The Governor leads the executive branch, supported by a Lieutenant Governor. Other elected executive positions include Treasurer, Attorney General and Secretary of State. Executive departments led by appointed officials include Department of Administration, Department of Health, Department of Transportation and Department of Environmental Management. The Governor also chairs the board of directors of the Rhode Island Commerce Corporation (aka, Commerce RI, formerly RI Economic Development Corporation).

Unlike most other states, Rhode Island does not have an executive residence or Governor's Mansion. Given the state's small size and concentration of population around the capital, the governor's access to state offices has never posed significant problems.

More on the Executive Branch

The legislature generally meets in two sessions, one in January and another in May and June. In general, the first session hears testimony on legislation but passes little. Historically, the General Assembly passes most major legislation in the second session, which is generally hectic with many days running past midnight.

As bills are sometimes poorly vetted or barely read by some members, the resulting laws can have unintended consequences that later prove costly. For this reason, some in the state advocate for creating a more "professional," full time legislature.

More on the Legislative Branch

More on the Rhode Island Courts