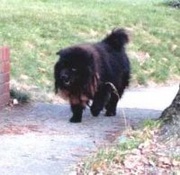 Black Dog was a local stray that achieved celebrity status among Near West End residents that either loved or feared him. He was a Chow mix and while never particularly friendly with people, he was never aggressive either.

The Legends and Rumors

He was legendary for evading the dog catcher several times over the years, able disappear at the slightest hint of danger. He was rumored to have inattentive owners on Westmoreland Street but it can't be confirmed.

Black Dog was hit by a car and killed on July 2, 2009 at the intersection of Cary Street and Maxwell. He was laid to rest in an undisclosed location in Buckingham County.