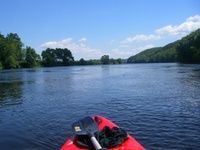 The James River bisects Richmond and serves as a valuable natural resource for the region.

The James is known in fishing circles for its smallmouth bass population but spotted and largemouth bass are also present.[1] Recent years have shown smaller than average spawns, but the river remains a popular destination for local fishermen.[2]

A Virginia Fishing License is required and can be purchased here from the Virginia Department of Game and Inland Fisheries. 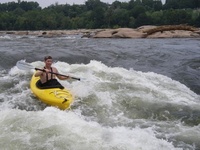 There are public boat launches available at several locations around metro Richmond, listed on the state website here.

During warmer months, many people visit Belle Isle, Pony Pasture Rapids (near the Huguenot Bridge), Texas Beach, or any of the other properties in the James River Park System.

A city ordinance requires that life jackets be worn by anyone in or on the river when it rises 5 feet or more. When it reaches 9 feet, the river is closed to all except those with permits.

On August 31, 2004, the Shockoe Bottom district was devastated by flooding brought on by torrential rains from the remnants of Tropical Storm Gaston. The storm lingered over the Richmond area, dumping nearly 12 inches (300 mm) of rain in the Shockoe Bottom watershed. A 20-block area, including most of Shockoe Bottom, was declared uninhabitable in the wake of the flood.

A multi-million dollar floodwall was completed in 1995, in order to protect the city and the Shockoe Bottom businesses from the rising waters of the James River.

Richmond suffered some severe flooding in 1972, when Hurricane Agnes dumped 16 inches (410 mm) of rain on central Virginia. This flooded the James River to 6.5 feet (2.0 m) over the original 200-year old record.