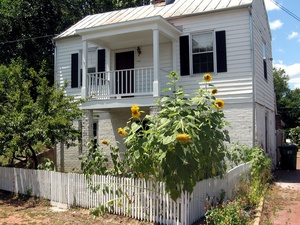 The Union Hill neighborhood in Church Hill is located on a high hill east of Shockoe Valley and is roughly bordered by Jefferson Avenue, 25th Street, Carrington Street, and Mosby Street. The neighborhood includes the hill-top Jefferson Park with its sweeping view of Richmond and the James River, several 19th century churches, a mixed collection of historic houses, and the former Hasker & Marcuse / American Can Factory (now the Church Hill House).

The name Union Hill first appeared in 1817 and springs from the joining of Doing’s and Adams’ hills. Union Hill was for most its first century separated from the rest of Church Hill by a deep ravine. This physical isolation, combined with its hilly and rugged terrain, led to development of a community with a unique layout and distinctive character. When the streets were first laid out in 1805, they were drawn to in irregular pattern to accommodate the hilly terrain.

The first house was built in Union Hill sometime between 1805 and 1810. The only building to survive in Union Hill from the earliest phase of development is the Adam Miller house at 2410 Venable Street (built in 1824). The neighborhood was essentially built out in the decades before and after the Civil War.

Union Hill was listed on the National Register of Historic Places in 2002. On Monday, November 23, 2009, City Council voted to add Union Hill to the list of the city’s Old and Historic Districts.