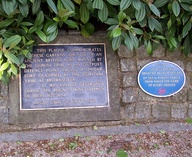 Jubilee Gardens/Regent Place, Rugby is a triangular area of half an acre, the site of a statue of Rupert Brooke, and of two plaques which read:

"This plaque commemorates in these gardens the site of an ancient British fort manned by the Dobuni tribe as an outpost defence point facing a similar fort occupied by the Coritani Tribe at Brownsover. It was finally destroyed during the reign of King Stephen of Blois 1135 - 1154. Rugby Civic Society - 1977."

"Site of 13th century moated manor house of the de Rokeby family from which the name of Rugby derives."

The gardens were more recently the site of the Regent Street Baths, opened in 1910. This was replaced by the leisure centre in the late 70s, and on 7th of June 1077 Regents Place was opened as Jubilee Gardens for the Queen's Silver Jubilee by Councillor G D Collett, Mayor of the Borough of Rugby.

The Council purchased this half an acre piece of land in 1903 for £2,105. In 1906 the area was laid out as an ornamental garden. However, many people were in favour of building a swimming pool there and so on Saturday 30th April 1910 Regent Street Baths opened to the public, having been built at a cost of £4200 by a Mr. Cockerill.