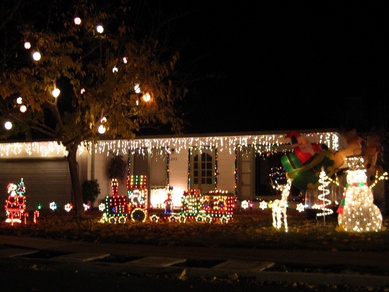 A single block near Kennedy Middle School that is known for its Christmas decorations.  They do have some neat wooden cut outs of Christmas characters.

In the past the residents used to hand out little candy canes, but I don't know if they still do.  They also used to have "Merry Christmas" banners on each garage in different languages, but they don't this year.

In December, people with kids often drive slowly down the street, or park, get out, and walk to see all the lights while singing Christmas carols.