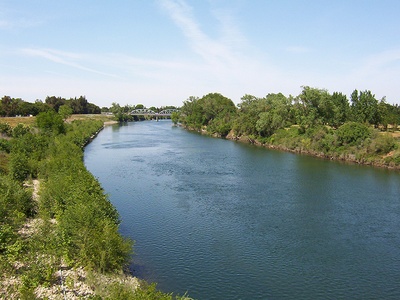 American River at Sac State, from Guy West BridgeThe American River begins its descent from the Sierras as several forks which slowly combine and dump into Folsom Lake. Folsom Lake is held by the Folsom Dam, which releases water into Lake Nimbus, which is held by the Nimbus Dam. The Foresthill Bridge is one bridge that spans the river.

From the Nimbus Dam, the American River wanders approximately 21 miles to its confluence where it meets the Sacramento River. The confluence is near I-5 and Richards Blvd., inside of Discovery Park.

In Sacramento the American River is bordered on both sides by the American River Parkway, which consists of publicly and privately held properties, which serve as a buffer from the urban environment. This is the site of the annual Eppie's Great Race triathlon.