The American River Parkway runs along the American River from Folsom Dam to the confluence with the Sacramento River in Sacramento County. The parkway consists of many smaller parks, bike trails & boat launching points. It can be accessed by various exits off Highway 50. This is the site of the annual Eppie's Great Race run, bike, paddle triathlon.

Parks within the Parkway

Parks are listed from upstream to downstream. 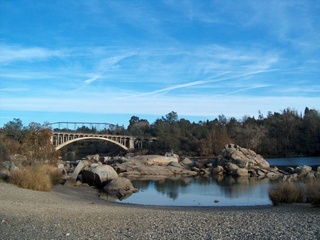 Sailor Bar in Fair Oaks was settled by gold-seeking sailors who dredged it for gold during the Gold Rush. It features a gravel road that provides access for launching small watercraft and rafts. The access to Sailor Bar is from Illinois Avenue in Fair Oaks. There is a daily fee for parking. Better yet, purchase the annual parking pass from Sacramento County Parks, or walk-in at the Sacramento County offices at the regional Fair Oaks office located within the shopping center on the southwest corner of Madison Avenue & Hazel Avenue. The street address is: 5229 Hazel Avenue for the county offices.

There is also a hike-in gate on the west end of Sailor Bar (from Olive Avenue), but this is not for vehicles. Due to county budget reductions and related community safety issues, the Olive Avenue parking lot is not presently (2014) open for vehicles and the gate is locked. The public should use the vehicle gate on Illinois Avenue which is open from dawn to dusk. 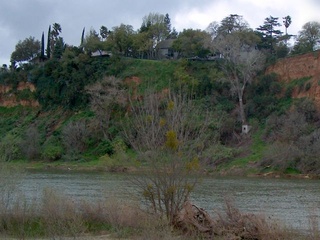 Cliffs on the Fair Oaks side of the river, as seen from Upper Sunrise Recreation Area. If you look closely, you can see the outline of the privately owned peace sign on top of the cliff, which is regularly lit at night and can be seen by anyone crossing the Sunrise Boulevard bridge. Photo by queerbychoice. Upper and Lower Sunrise Recreation Areas are east and west, respectively, of Sunrise Boulevard, in Gold River and Rancho Cordova. Upper Sunrise features a small boat launch and access to the Nimbus Dam fish hatchery. Lower Sunrise is a popular raft launch area and features an equestrian staging area. The Jim Jones pedestrian bridge connects Lower Sunrise to Sacramento Bar.

Sacramento Bar in Fair Oaks is a popular spot for salmon fishing in fall and winter. The Jim Jones pedestrian bridge connects it to Lower Sunrise Recreation Area. 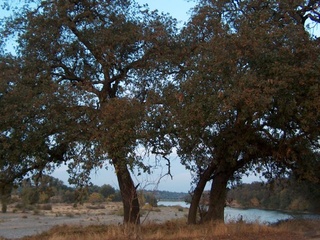 Ambassador Park is a tree-covered area directly across the river from the gravelly area visible between these two oak trees. Photo by queerbychoice. Ambassador Park is an unofficial name for the small grove of trees and rather obscure path located between Lower Sunrise Recreation Area and Rossmoor Bar in Rancho Cordova. It features a small parking area on Ambassador Drive, about 0.2 miles east of El Manto Drive. 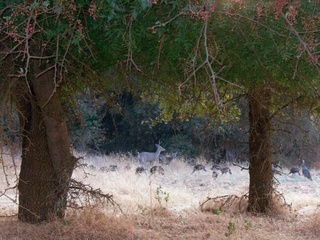 Two deer and a flock of wild turkeys at Rossmoor Bar. Photo by queerbychoice. Rossmoor Bar is a peninsula, bordered on three sides by the American River. This was one of the first locations in the Sacramento area to be settled by people of European descent. 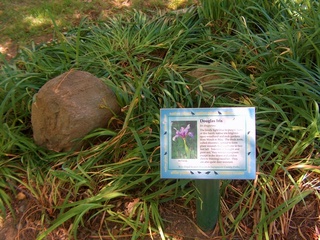 A native plant garden in front of Effie Yeaw Nature Center features signs that identify and describe various native plants. Photo by queerbychoice. Ancil Hoffman Park is a 396-acre park located within the American River Parkway in Carmichael. A major feature of the park is the Effie Yeaw Nature Center. The park has many ancient oaks and is bordered on two sides by the American River. Reconstructed Maidu Indian homes are on the nature center grounds. The Ancil Hoffman Golf Course is also part of the park. Many varieties of animals can be seen including; wild turkey, deer, and hawks. One can access the park by taking the Watt Avenue exit off Highway 50. 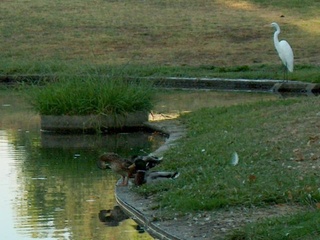 The Sarah Court river access in Carmichael is a small, rocky beach with an access ramp wedged between private properties. The vehicle access gates to the eleven-space parking lot are closed during the summer months. Alcohol is always prohibited. 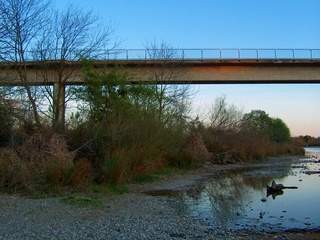 River Bend Park features a large gravelly bar on the riverbank. Photo by queerbychoice. River Bend Park is a 444-acre park that was one of the original three areas purchased between 1961 and 1964 by Sacramento County to create the American River Parkway. The county purchased it in stages from 1961 to 1964. Formerly known as Goethe Park for local entrepreneur Charles Goethe, the park was renamed in 2008 to disassociate it from Goethe's racist and eugenicist acts. The Harold Richey Memorial pedestrian bridge connects this park with the William B. Pond Recreation Area. 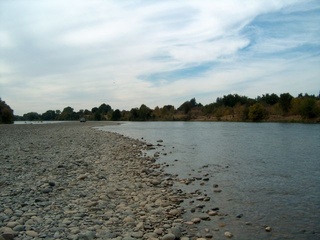 It is possible to drive directly up to the river in Gristmill Recreation Area. Photo by queerbychoice. 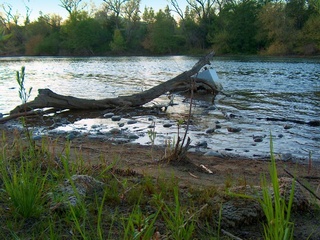 Please don't litter! This visit to the S.A.R.A. access would have been much more enjoyable if whoever dumped the chair in the river and the carpet on the shore of the river had gone to an actual landfill instead of turning the river into a landfill. Photo by queerbychoice. The Waterton access has been closed to vehicles since September 2009, and the S.A.R.A. (Save the American River Association) access has always been for pedestrians only. 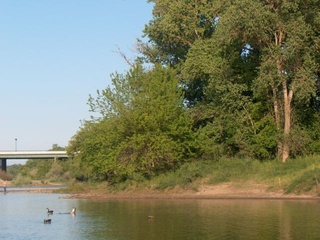 The Howe Avenue access features a car-top launch that allows small boats and rafts to be launched into the American River. The bike trail joins with a flood-control levee at this point. Restroom facilities and a drinking fountain are available just across the Howe Avenue bridge, on the Jedediah Smith Memorial Bike Trail.

Riverfront Park is on the north side of the river, next to Cal Expo.

Discovery Park is a 302-acre park located at the confluence of the American River and the Sacramento River, just outside of Downtown. It is accessible by taking the Garden Highway exit off I-5. Discovery Park is where the Jedediah Smith Bike Trail begins. The bike trail continues all the way to Folsom through historic Leidesdorff Ranch, established in 1844. This 35,000-acre cattle and wheat ranch was once owned by William Alexander Leidesdorff, Jr., who was the first African American diplomat in U.S. history and owned just over half of the entire American River Parkway.