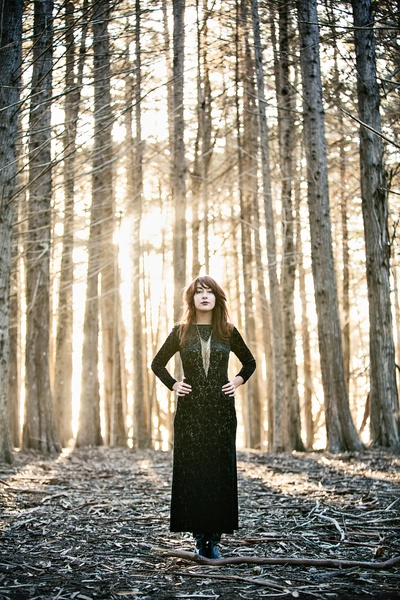 Autumn Sky from the cover of the SCOUT EP, released in March 2014. Lemonade Magazine gave it 5 stars! Photo credit to Sarah Dawson.

BIOGRAPHY
Folk-rock wunderkind, Autumn Sky has been winning the attention of Sacramento News & Reviews' readership for years; outlined by the growing number of Sammie awards for Artist of the Year she collected in 2010, 2011, 2012 and a Hall of Fame Award in 2013. With a songbook that spans an arsenal of self-penned compositions, well-placed covers and her signature decorative flair; Autumn's shows organically connect with listeners of any age while weaving heart-wrenching tales of youth, pain & true-to-life growth evermore.
Autumn's philosophy of making real connections with her audience & fans alike have won her a great number of truly dedicated followers wherever she goes. Her number of attendees at shows continue to grow, her Facebook page has climbed to an authentic 8,000 fans and songs on Soundcloud have seen beyond 100,000 plays after only two months.
With performance experiences that have taken she and her band of capable cohorts from coffee house to the grand stage; Autumn Sky is prepared to connect with your heart and soul through a devilish smile and surprisingly mature storytelling prowess. Most notably of late, she and her bandmates won the hearts of audience members during a supporting role for Peter Murphy of Bauhaus fame at the acclaimed Uptown Theatre in the Napa Valley.
When asked how her music has grown over time, she admits that "many terrible decisions, heartbreaks and eventually finding the courage to love myself has made my music more believable, more soulful, and vastly more relatable."
Whether she's performing solo acoustic or with her full ensemble of ten rotating band members, Autumn Sky always delivers an honest, energetic, welcoming and uplifting performance. Though ever evolving, her sound is influenced by the likes of Death Cab For Cutie, Metric, Stevie Nicks, The National and many more. Now, having achieved the highest level in her local music scene, Autumn Sky is now bringing her talent to regional and national audiences."

PUBLISHED PRAISE OF THE BAND 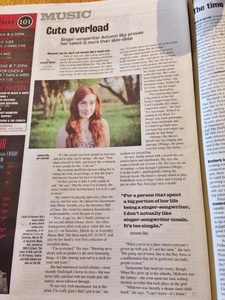 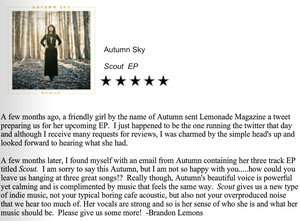 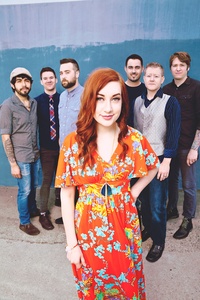 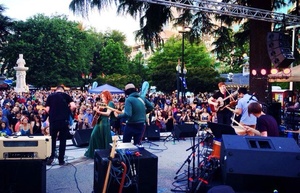 The Autumn Sky Band performs at Concerts in the Park in 2014. Photo credit to Laith Kaos.

Autumn believes in a beginning-to-finish concept to each album release process. Each album is a particular group of songs having to do with the particular theme of the album, drawing heavy-handedly from emotionally delicate personal experiences. The SCOUT EP focused on spotlighting the motivation, difficulties, frailties and successes behind being a feminist songwriter in a generally unkind music industry. It also plays dramatically on the dark and light characteristics of Autumn in herself, her life and her music for the purpose of showing that one must strike a balance and not fight the conflicting parts of humanity that live within us all. You will therefore notice a large use of dark imagery, dark clothing and heavy shadows in the photography, costuming, performances, albums and lyrics paired effortlessly against bright lights, stark whites, candles, crystals and flowing fabric to up the contrast even further. Sky credits the innovative costuming and conceptual art and music of David Bowie, the magic realist works of fiction by Gabriel Garcia Marquez and the solo albums of Stevie Nicks as her idols in the field of performance art. 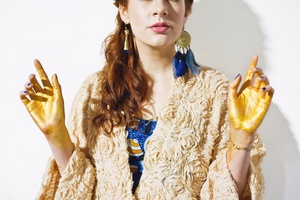 Autumn Sky pre-show. Gold metallic paint to catch the light during the dancing segments of the show. Photography by Daniel Dare. 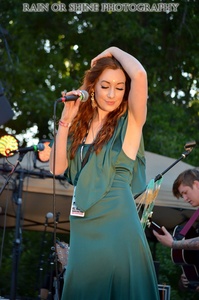 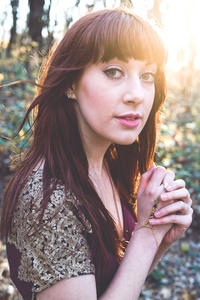