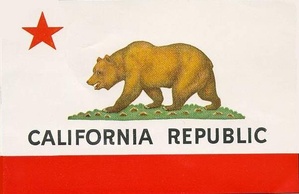 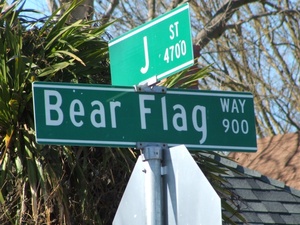 The Bear Flag Museum, located at www.BearFlagMuseum.org, is a nonprofit online museum and library, operated out of Sacramento, CA, devoted to collecting together at one site all information and images regarding the California Bear Flag and the California State Flag.

IT'S THAT TIME OF YEAR AGAIN! Bear Flag Museum Exhibition 6/13/2010 at Sonoma's Annual Bear Flag Celebration The BFM presented an exhibition of its collection on Sunday June 13, 2010 at the Plaza in downtown Sonoma, CA. Sonoma is where the Bear Flag was created in June 1846 to represent the Bear Flag Revolt. The Native Sons of the Golden West, Sonoma Parlor #111 is organizing the Annual Bear Flag Celebration. Sonoma has been celebrating the Bear Flag annually in June since the 1840S. The BFM will be in the Plaza all day. Come by and visit us. It is always a great day. 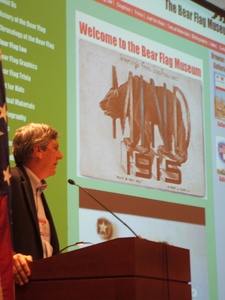 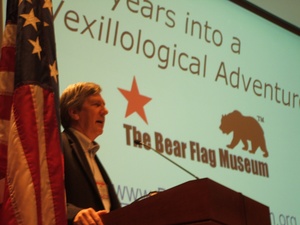 Trinkle speaking at NAVA Convention Bear Flag Museum's Executive Director Re-Elected Officer of the North American Vexillological Association William J. Trinkle, the BFM's executive director, has been elected secretary of the North American Vexillological Association("NAVA"), a nonprofit corporation dedicated to the scholarly study of flags. The re-election took place at NAVA's 44rd Annual Convention held in Charleston, SC in October 2009. Trinkle was Chair for the NAVA 44 Annual Meeting which held in Los Angeles the weekend of October 8 -10, 2010. The BFM presented an exhibit at the Annual Meeting. 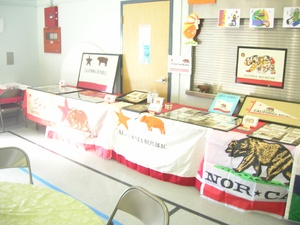 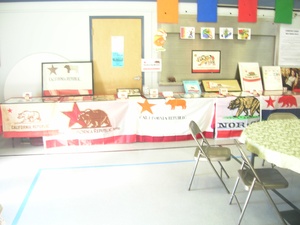 Bear Flag Museum at Wilton Centennial Bear Flag Museum at the WILTON, CA CENTENNIAL, SATURDAY 9/27/2008 On September 27, 2008, the Bear Flag Museum presented an exhibition of its Bear Flag collection at the 100th Anniversary of the town of Wilton, CA located 20 minutes from downtown Sacramento, east of Elk Grove off Dillard Rd. This all day, historic, family friendly event included a pancake breakfast, parade, spelling bee, live music, chili cookoff and many other events. Historical exhibitions including the BFM's were held at the Dillard Elementary Multi-purpose Room. 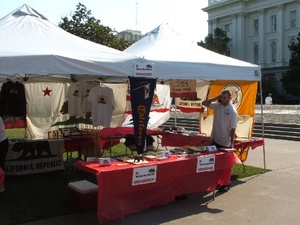 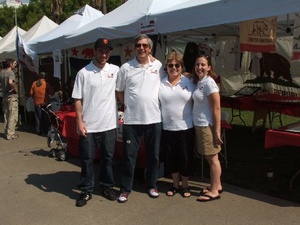 Bear Flag Museum at the State Capitol, 6/14/2008 On June 14, 2008, the Bear Flag Museum participated in the U. S Postal Service’s Ceremony for the issuance of the new California State Flag stamp issued as one of the Flags of Our Nation stamp series. The ceremonies were held on the west steps of the California State Capitol from 10 a.m. to 2 p.m. The BFM presented an exhibition of some of the flags and other Bear Flag items in its collection for public viewing. Peggy Rose of Peggy Rose Design assisted the Postal Service in creation of a special envelope cachet for the First Day of Issue of the stamp. Hundreds of members of the public enjoyed the exhibitions. The BFM was pleased to share the events with the California Arts Council and Jillian Kogan, the artist who created their "California Imagination" promotion. See the promotion here: http://www.cac.ca.gov/imaginationproject/video.php

The California Bear Flag In 1846, a flag was created for the short-lived California Republic aka Bear Flag Republic. A photograph of what very well may be the original Bear Flag is shown below, center. The Bear Flag soon became an emblem for the pioneers and the pioneer spirit of Californians. Then, in 1911, the California State Legislature (here in Sacramento) adopted a law making the Bear Flag the official flag of the State of California. In 1953, the flag law was modified to establish a detailed design for the Bear Flag, similar to the image on the upper right corner of this page.

Sacramento and the Bear Flag Revolt It is usual to think of Sonoma when one thinks of the Bear Flag Revolt and its flag, however, Sacramento and its environs also were involved in the Revolt. The first acts of the Bear Flag Revolt insurgents are associated with a group of about 10 men taking more than a hundred horses from Mexican Lieutenant Francisco Arce, possibly because it was feared those horses would be used to roust foreigners from California. Lt. Arce had brought the horses from Sonoma, first to Sutter’s Fort, here in Sacramento. Arce then traveled to Murphy’s Rancho with the horses and he and his men camped there on the night of June 9, 1846. Murphy’s Rancho was located along the Consumnes River, adjacent to what is now the intersection of Grant Line Road and Highway 99 in Elk Grove, Sacramento County. On the morning of June 10th, the horses were taken from Lt. Arce. Those horses were then taken back across Sacramento County to the camp of John C. Fremont, near the Sutter Buttes. On June 14th, 1846, following the capture of Sonoma, several prisoners were taken by members of the Revolt from Sonoma and first to Fremont’s camp and then directly to Sutter’s Fort where they were held as prisoners until long after the Bear Flag Revolt had ended.

The photograph in the upper left corner shows Bear Flag Way in Sacramento (1 of 3 "Bear Flag" streets in California). The photographs in the lower left and right corners are of the former Bear Flag Elementary School, located on Gloria Drive in the Greenhaven/Pocket neighborhood of Sacramento.

If you have information or textual materials or images about the flags which you would like to make available for display at the BFM, or if you have questions or comments,

email us at [email protected] 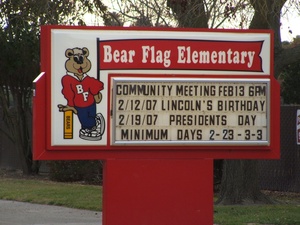 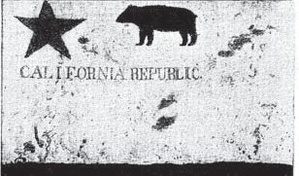 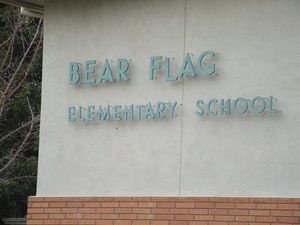 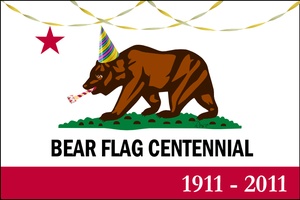 ON FEBRUARY 3, 2011, THE CALIFORNIA STATE FLAG CELEBRATED ITS CENTENNIAL ANNIVERSARY.