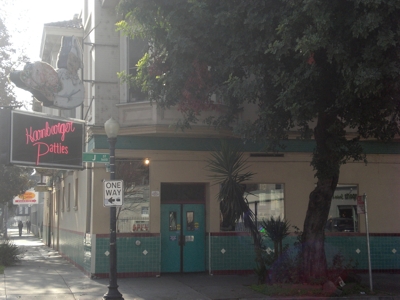 Formerly know as Hamburger Mary's, this joint is now named Hamburger Patties. They're a independent sandwich/burger restaurant that hails originally from San Francisco's Folsom Street area. With an attached full bar, this is a great place to meet up with friends for a casual Saturday afternoon lunch and early drinks. Good vegetarian vegetarian. Nothing terribly spectacular here.

They also have karaoke on Friday and Saturday nights.

2005-02-23 18:14:26   There is some speculation that the Sacramento Hamburger Mary's might close soon. Probably just the rumor mill. —Users/JaimeRaba

2005-04-24 16:14:06   Hamburger Mary's started in SFs Folsom Street area, in what was the heart of the city's gay bar district. I suppose, by extension, there's that association of Hamburger Mary's as a "gay restaurant," but it doesn't discriminate against straight people, and one certainly doesn't feel unwelcome or out of place there. It's not like the place is crawling with flamers and nobody's likely to tag you as gay if you go to Hamburger Mary's. BTW: Hot Rod's Burgers would be more likely to be identified as a "gay business" than Hamburger Mary's. —Users/AlphaDog

2007-05-03 17:02:48   "slightly upscale" is a bit of a stretch. Although, I am quite fond of Mary's I always feel a bit dirty after leaving. The carpets look like they have not been shampooed in years, the booths have reached the end of their useful life, and everything from the walls to the traky trinkets that adorn the place could use a good scrubbing.

That said, the food is good and cheap, the company is great, and the lesbian karoke is hard to beat. —cms1978

2007-07-24 21:48:37   Hamburger Mary's has changed its name. Apparantly the owners were to cheap to pay their franchise fees so they dropped the name. From what I hear the new name is Hamburger Patty's, although they have yet to put up a new sign. Nothing else seems to have changed and the place can still use a really, really good cleaning. —cms1978

They updated their menu and t-shirts to reflect the name change. I doubt they change the sign anytime soon - several letters are missing anyway. —CharlesMcLaughlin

2008-01-20 20:29:15   Hamburger Mary's is a very fine dining experience, and when I saw experience, I mean that it is a feast for all of your senses, and not always a pleasant one. This restaurant feels very dirty and some of the paintings and other... things on the wall are unattractive, with some exceptions. Speaking of which, does anybody here happen to know who painted a particular painting in the restaurant; it is a painting of a large man in a strange costume holding a goose. I happen to like this painting.

Other than this, the food is quite good and the servers are friendly. Prices, too, are good. Recommended if you can bear the strange atmosphere. I don't quite get the theme of this place other than "assorted weirdness." —DavidRobinson

2009-01-31 02:52:14   It's an OK restaurant, the co-owner Richard can be a real jerk when he's been drinking though. I heard he recently told some woman she was a bad mom because she let her kids sing karaoke and had them out till 10:30 on a Friday night. If your going to host karaoke in a restaurant and you don't want anyone under 18 singing you should really post it some were. Also you should never disrespect someone in front of others, calling someone a bad mother because she took her kids to a restaurant for Ice cream and let them sing a karaoke song before leaving is just wrong. This guy really needs to apologize to that woman and all the customers who witnessed it. —bleu

2010-12-13 08:37:22   We went to this restaurant/bar and we were not once greeted nor was our order took by a waitress the whole time we were there. When the waitress was near our table (on the bar side), we said Exuse me, and she turned around looked at us and continued to serve the table of Lesbians (we were heterosexual couples at our table.) We do not discriminate regarding gays or else we wouldn't have been there, but that night we WERE discrimnated against because we were of color and not gay. We were there at least 3 hours for karaoke on a Saturday. Even when I went to the bar alone to order a drink and water, the bartender told me they were out of water glasses. Mind you, I had an empty glass that he could have put the water into. Then some strange blonde that I do not know kept coming over to our table. I finally told her to go back over and sit with her husband at the bar and leave us (me) alone. It was so embarrassing how things later turned out as we were forced out of there by security and one of the members in my party was threated with mace for speaking up and letting them know that we had not been served or had our order taken. We did not come there to start anything and we were enjoying the singing, but our table was definitely ignored for service and it was most embarrassing given I had recommended the place to my out of town guests. —SandySinger