Valley Miwok, Shonommey and Maidu Indians lived in this area for perhaps thousands of years. Unlike the settlers that would eventually make Sacramento their home, these Indians left little evidence of their existence. Their diet was dominated by acorns taken from the plentiful oak trees in the region, and by fruits, bulbs, seeds, and roots gathered throughout the year.

From pioneers to gold fever

The pioneer John Sutter arrived from Liestal, Switzerland in the Sacramento area with a land grant from the government of Mexico and with other settlers. In August 1839 he established the trading colony and stockade Sutter's Fort (as New Helvetia or "New Switzerland"). Sutter's Fort was constructed using labor from local Native American tribes. Sutter received 2,000 fruit trees in 1847, which started the agriculture industry in the Sacramento Valley. In 1848, when gold was discovered by James W. Marshall at Sutter's Mill in Coloma (located some 50 miles northeast of the fort), a large number of gold-seekers came to the area, increasing the population. John Sutter Jr. then planned the City of Sacramento, against the wishes of his father, naming the city after the Sacramento River for commercial reasons. He hired topographical engineer William H. Warner to draft the official layout of the city, which included 26 lettered and 31 numbered streets (today's grid from C to Broadway and from Front to Alhambra). However, a bitterness grew between the elder Sutter and his son as Sacramento became an overnight commercial success (Sutter's Fort, Mill and the town of Sutterville, all founded by John Sutter, Sr., would eventually fail).

The part of Sacramento originally laid out by William Warner is situated just east and south of where the American River meets the Sacramento River (though over time it has grown to extend significantly north, south, and east of there). A number of directly adjacent towns, cities or unincorporated county suburbs, such as Carmichael, Citrus Heights, Elk Grove, Folsom, Roseville, West Sacramento, Orangevale, and North Highlands extend the greater Sacramento area.

The citizens of Sacramento adopted a city charter in 1849, which was recognized by the state legislature in 1850. Sacramento is the oldest incorporated city in California, incorporated on February 27, 1850. During the early 1850s the Sacramento valley was devastated by floods, fires and cholera epidemics. Despite this, because of its position just downstream from the Mother Lode in the Sierra Nevada, the newly founded city grew, quickly reaching a population of 10,000.

The California State Legislature named Sacramento as the permanent home of the state capital in 1854 by law, but the city did not physically hold that honor until January 1, 1855. Previously, the capital was located in Monterey, San Jose, Vallejo, and Benicia successively.

Begun in 1860 to be reminiscent of the United States Capitol in Washington, DC, the Renaissance Revival style California State Capitol was completed in 1874. The legislative chambers were first occupied in 1869 while construction continued.

With its new status and strategic location, Sacramento quickly prospered and became the western end of the Pony Express, and later the First Transcontinental Railroad (which began construction in Sacramento in 1863 and was financed by "The Big Four" — Mark Hopkins, Charles Crocker, Collis P. Huntington, and Leland Stanford).

The same rivers that earlier brought death and destruction began to provide increasing levels of transportation and commerce. Both the American and especially Sacramento rivers would be key elements in the economic success of the city. In fact, Sacramento effectively controlled commerce on these rivers, and public works projects were funded though taxes levied on goods unloaded from boats and loaded onto rail cars in the historic Sacramento Rail Yards.

Between the years of 1864 and 1877, Sacramentans raised the level of the city by a variety of means including landfill. The previous first floors of buildings became the basements and the previous streets became a series of underground tunnels. The purpose of raising the city was to reduce the risk of future flooding. Now both rivers are used extensively for recreation. The American River is a 5 mile-per-hour waterway for all power boats (including jet-ski and similar craft) (Source Sacramento County Parks & Recreation) and has become an international attraction for rafters and kayakers. The Sacramento River sees many boaters, who can make day trips to nearby sloughs or continue along the Delta to the Bay Area and San Francisco. The Delta King, a paddlewheel steamboat which for a long time lay on the bottom of the river, was refurbished and is now a hotel and restaurant.

The Sacramento-Yolo Port District was created in 1947, and ground was broken on the Port of Sacramento in 1949. On June 29, 1963, with 5,000 spectators waiting to welcome her, the Motor Vessel Taipei Victory arrived. The port was open for business. The Nationalist Chinese flag ship, freshly painted for the historic event, was loaded with 5,000 tons of bagged rice for Mitsui Trading Co. bound for Okinawa and 1,000 tons of logs for Japan. She was the first ocean-going vessel in Sacramento since the steamship Harpoon in 1934.

The city's current charter was adopted by voters in 1920, establishing a city council-and-manager form of government, still used today. As a charter city, Sacramento is exempt from many laws and regulations passed by the state legislature.

Sacramento City and County (along with a portion of adjacent Placer County) are served by a customer-owned electric utility, the Sacramento Municipal Utility District. Sacramento voters approved the creation of SMUD in 1923. In April, 1946, after 12 years of litigation, a judge ordered Pacific Gas & Electric to transfer title of Sacramento's electric distribution system to SMUD. SMUD today is the sixth-largest public electric utility in the U.S., and has a worldwide reputation for innovative programs and services, including the development of clean fuel resources, such as solar power.

Despite a devolution of state government in recent years, the State of California remains by far Sacramento's largest employer. The City of Sacramento expends considerable effort to keep state agencies from moving outside the city limits. In addition, many federal agencies have offices in Sacramento.

In the early 1990s, Mayor Joe Serna attempted to lure the Los Angeles Raiders football team to Sacramento, selling $50 million in bonds as earnest money. When the deal fell through, the bond proceeds were used to construct several large projects, including expanding the Convention Center and refurbishing of the Memorial Auditorium. Serna renamed a city park for controversial farm labor organizer Cesar Chavez. Through his effort, Sacramento became the first major city in the country to have a paid municipal holiday honoring Chavez.

In the late 1990s and early 2000s, Mayor Heather Fargo made several abortive attempts to provide taxpayer financing of a new sports arena for the Maloof brothers, owners of the Sacramento Kings NBA basketball franchise (this was a reversal of her long held former position against public subsidies to professional sports teams, a stance partial responsible for her being elected to mayor). In November 2006, Sacramento voters soundly defeated a proposed sales tax hike to finance this.

Mayor Fargo's tenure also saw the passing of a resolution for immediate unilateral withdrawal from the war in Iraq, and a resolution condemning the Patriot Act.

Sacramento has been involved in lengthy litigation as the defendant in lawsuits by disabled activists demanding that all City facilities, especially sidewalks, be made wheelchair accessible. Costs are estimated in the hundreds of millions of dollars for these improvements; work is now proceeding on such improvements throughout the city.

In 2003, the City Council required City contractors to pay a "living wage" to all employees.

Recently, the City Council considered adopting a resolution that would regulate the operations of hospitals in the City. Of the proposed resolution, the Sacramento Metro Chamber of Commerce said it "vigorously opposed the resolution. A municipal resolution seeking to regulate hospital operations is not only redundant vis-a-vis existing federal and state law, it will likely introduce inconsistent standards to be created, applied and interpreted by persons having no particular knowledge or expertise in health care operations."

A proposal for a large city park called Gold Rush Park, that would be large enough to rival great parks in other cities, is being advocated by the Gold Rush Park Foundation.

The 1980s and 1990s saw the closure of several local military bases: McClellan Air Force Base, Mather Air Force Base, and Sacramento Army Depot. As a result, the U.S. armed forces have little military presence in the city except for recruiting offices.

In 1967, Governor Ronald Reagan became the last Governor of California to live permanently in the city. A new executive mansion, constructed by private funds in a Sacramento suburb for Reagan, remained vacant for nearly forty years and was recently sold by the state. The California Supreme Court normally sits in San Francisco.

In spite of major military base closures and the decline of agricultural food processing, Sacramento continued to experience massive population growth in the 1990s and early 2000s. Primary sources of population growth are people migrating from the San Francisco Bay Area seeking lower housing costs, as well as immigration from Asia, Central America, Mexico, Ukraine, and the rest of the former Soviet Union. From 1990 to 2000, the population grew 14.7%. The Census Bureau estimates that in four years (2000-2004), the population of Sacramento County increased from 1,223,499 to 1,352,445.

In 2006-2007, Sacramento experienced a major disappointment with the failure of the the Towers construction project on 5th Street. Originally slated to be the largest construction project West of the Mississippi, the developers failed to consider the market demand for office, condo space and steel prices. The current project is uncertain; leaving a major hole in Sacramento's downtown and riverfront.

Current State Of the Project: 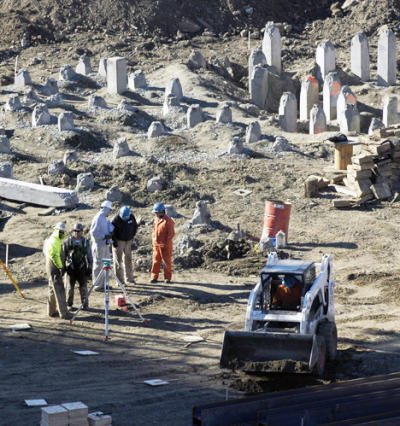 Original Design no longer under consideration: 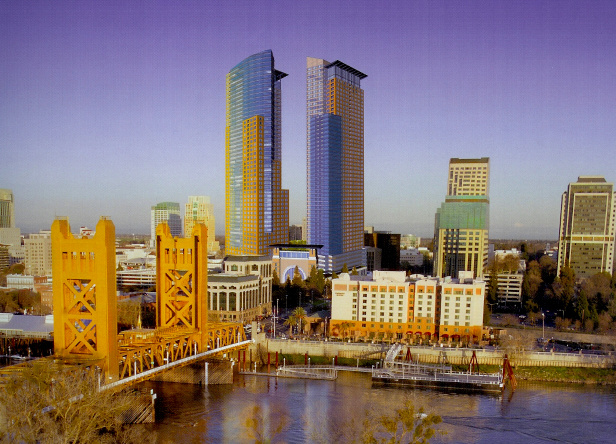 See Great Speeches And Interviews for in-depth information on history and politics.

Portions of this article are licensed under the GNU Free Documentation License. It uses material from the Wikipedia article Sacramento.