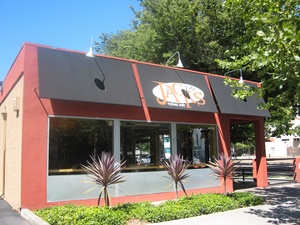 Jack's Urban Eats is a American style  restaurant famous for their garlic fries, Tri-Tip sandwiches, and mashed potatoes. They serve mostly sandwiches and salads.  They have locations in Midtown, Loehmann's Plaza in Arden-Arcade, Folsom, Natomas, Gold River, Roseville on Sierra College Boulevard, the Roseville Galleria, plus one in Davis.

See also other restaurants, or other businesses in the business directory.

2007-05-04 02:14:41   I've only been to Jack's Urban Eats a couple of times, and always the location on 20th (at Capitol) . I first visited it because the Sacramento News & Review "Best of Sacramento" listed it as the best fries of any local establishment (non-chain). I enjoy french fries and I detest chains, so wanted to check out this place.

It's a casual place, sort of cafeteria style where you line up to tell them what you want, then you go grab a seat. This location, at least, can be a little crowded at times since it is not that big. Not sure of the other locations.

Each time I've been there I've had the tri-tip sandwich and the "urban" fries. Both are very good. I think that pair runs about $8 or so. I base that on my memory to give you an idea of their prices. It is not expensive. Two could probably dine easily for under $20. One time I went and my companion and I split the sandwich and the fries (we weren't THAT hungry.)

It is my opinion that the "urban" fries are the best fries I've ever had. They come covered with bleu cheese and chili oil, giving them a spicy, cheesy flavor. It sounds sort of strange but if you try them you will understand.

2007-08-13 19:26:25   It's exactly like Pluto's with different options. The sandwich menu at Pluto's is pretty tame (very basic), except for the weekly special - which are the types of sandwiches on the everyday Jack's menu. They have a variety of different salads you can order, or make your own. Pluto's wins the 'make your own salad' contest (more topping choices), but it's nice to have overall choices at Jack's. The fries were pretty good (the garlic fries have cheese on'em). Place has a great reputation, and it got some recognition in Sacramento Magazine too as the best budget food and best fries (August 07 issue). —EdWins