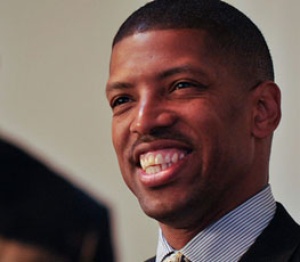 Kevin Johnson was elected Mayor of Sacramento in November 2008, and represents the entire city of Sacramento.

Kevin Johnson is the 55th mayor of Sacramento. He is the first native Sacramentan, and the first African American to be elected to the office. His vision is for Sacramento to become “a city that works for everyone.”

Johnson’s dedication to public service began long before he started his tenure as mayor. Upon retiring from the NBA after 12 seasons with the Phoenix Suns in 2000, he returned to his Oak Park neighborhood in Sacramento to serve as the CEO of St. HOPE, a non-profit community development organization he founded in 1989 to revitalize inner-city communities through public education, economic development, civic leadership and the arts. St. HOPE has dramatically improved the community of Oak Park through its holistic community development approach, and is recognized as a national leader in the “transformation high school” movement. Since taking office in December 2008, Mayor Johnson has accomplished a number of objectives in his ambitious action plan for Sacramento, including:

A graduate of the University of California, Berkeley (B.A., Political Science), Johnson is a tireless advocate for Sacramento, and has met with President Obama and his administration three times this year about critical regional issues. He regularly consults with the nation’s leading mayors, including New York City Mayor Michael Bloomberg; Washington, D.C. Mayor Adrian Fenty; San Francisco Mayor Gavin Newsom; Newark Mayor Cory Booker; and Atlanta Mayor Shirley Franklin, among others, to identify best practices. Johnson has served as a guest commentator on several networks including CNN, MSNBC, and Fox, and has been featured on The Larry King Live Show, The Oprah Winfrey Show, Dateline NBC and The Colbert Report.

However, Mr. Johnson ran into controversy when he was accused of raping a 16 year old girl and then paying her to stay quiet. Public interest was renewed after the victim published a blog post acknowledging the abuse, and videos of interviews with police officers in Phoenix, Arizona from 1996 were released.

Pursuing their investigation, Phoenix police officers went as far as Florida to try to arrange what they call a "confrontation call" between the girl and Johnson. Later, they were successful in taping a conversation in Arizona between Amanda and Johnson. An excerpt from the police report's 28-page transcript of the tape states:

Amanda: "Okay, well, do you think us being naked together or taking a shower was normal, or healthy, or …"

Johnson: "Amanda, I mean I said the same thing, the same thing. I told you the judgment was not in the best. And I'm sorry about that and again I felt we talked about and …

Johnson: "And I you're looking at it different than I'm looking at it and what you're saying happened, I'm not entirely agreeing happened. I'm, I'm sorry about that. And again I go back to the standpoint that additionally when I thought you and I talked about it afterward, I was hoping that you and I could come to terms enough that you felt whatever with it that you felt okay …"