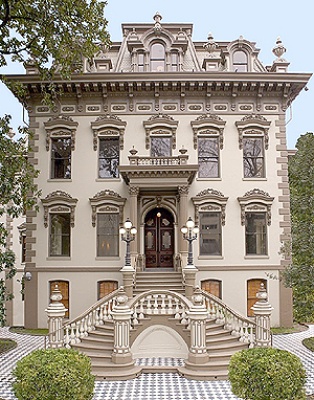 After a 14-year, $22 million restoration and rehabilitation, the Mansion is now open to the public as a museum. It also serves the citizens of California as the state’s official reception center for leaders from around the world.

Originally built in 1856 by Gold Rush merchant Sheldon Fogus, the Mansion was later purchased and remodeled (twice!) by Leland and Jane Stanford. Leland Stanford served as Governor of California from 1862-1863. The Mansion served as the office of three governors during the turbulent 1860’s - Leland Stanford, Fredrick Low and Henry Haight.

As a pro-Union Civil War governor and president of the Central Pacific Railroad, Leland Stanford negotiated political and business deals at the Mansion that helped complete the transcontinental railroad.

Jane Lathrop Stanford gave birth to their only child, Leland, Jr., here on May 14, 1868. The couple’s new wealth enabled them to expand the mansion in 1872, creating the architectural legacy you can see today.

In 1900 Jane Stanford gave the mansion to the Catholic Diocese of Sacramento, with an endowment of $75,000 in railroad bonds, for the “nurture, care and maintenance of homeless children.” The Sisters of Mercy, and later the Sisters of Social Service, adapted the aging building to their needs. As decades passed, the old neighborhood gave way to state office buildings, and the cost of upkeep grew. In 1987, the Stanford Home for Children moved to new facilities in north Sacramento.

In 1978 the State of California purchased the property for use as a state park. The imposing structure was listed as a National Historic Landmark in May 1987.

Information and images obtained from the California Department of Parks and Recreation.