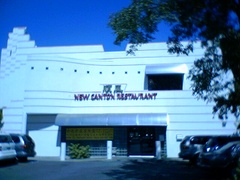 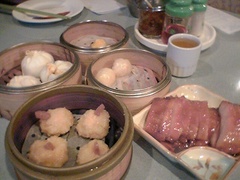 A selection of dim sum dishes

In the summer of 2005, the restaurant was closed due to some run-ins with cockroaches and health code violations. It was closed for 2 weeks and reopened after a reinspection.

Though they have a meager parking lot in front (maybe a dozen spaces at most), on the weekends one can park in the lot across the street for free.

*does anyone know if parking is enforced there on weeknights?

2005-09-28 22:21:54   After reading customer reviews (like at Chowhound) saying that New Canton has the best dim sum in the area, our small group tried it last weekend. There's limited seating on the ground floor but we opted to eat upstairs where all the action was. All the standards (e.g. har gow, siu mai, cheong fun, both steamed & baked cha siu bao) were delicious. The fried green tea balls with molten black sesame paste inside topped off a satisfying lunch. It's now our new favorite dim sum place over Holiday Villa, King's and Rice Bowl. —LillianChow

2005-10-03 12:34:35   This place is pretty good. I went here twice—once for work and once with friends—and the staff was pleasant both times. The food was good for Sac and a coworker commented that he liked it not because they have the best food but because the carts keep coming around. Overall, an enjoyable experience!! —LiRic

2007-03-11 13:01:43   The best Dim Sum in the area. Good Har Gow, shrimp balls covered in fried noodles, Steamed Pork Buns, and very good baked pork buns, chicken in fried rice flour dumplings, roast duck, radish cake, fried pork & shrimp buns, and stuffed eggplant. The peanut pork dumplings were nothing special, and the Taro root horns were too pasty. Everything tasted fresh, and nothing seemed greasy. We arrived at 11 AM on a Sunday, and got seated in fewer than 20 minutes. I'm looking forward to going back. —CraigBrozinsky

2007-09-04 10:30:35   I haven't tried all dim sum places in Sac yet, but a lot of people consider this to be one of the better places. I think their dim sum is decent, much better than some of the others I've had in the area, but its not as good as the better places in LA or the bay area. Despite the cited health code violation, the place seemed like one of the nicer and cleaner Chinese resteraunts around. —TheodoreSuryapurnama