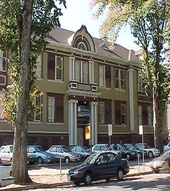 History Marshall School, built in 1903 and designed by Rudolph Harold, a locally prominent architect who designed City Hall, was used as a grade school until 1976. In the 1976, the school was closed and under went a major infrastructure overhaul and reopened in 1983. Since then Old Marshall School has supported a preschool (1983 - 1995), an adult school teaching English as a second language, paramedic training center, and employment center (1983 - 2009), the Met Charter High School (2000 - 2003). From August 2009 to November 2009, the Old Marshall School housed the Capitol Campus of the California Montessori Project.  The property has been vacant since 2009.