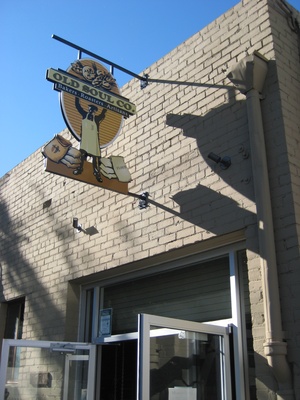 Tucked in a warehouse inside an alleyway in midtown Sacramento, Old Soul Coffee offers as laid back a cafe experience as you can find. It's informal and uncrowded, with huge bags of coffee beans strewn about. Perfect if you need to retreat, or lounge around for awhile. Also offers wholesale coffee. They offer free wireless internet, but you have to register.

Lately they've had a stand at the Wednesday evening Davis Farmers Market where they sell iced coffee and treats. Do they peddle their wares at other farmers markets?

They also have an interesting mural on their outside wall. 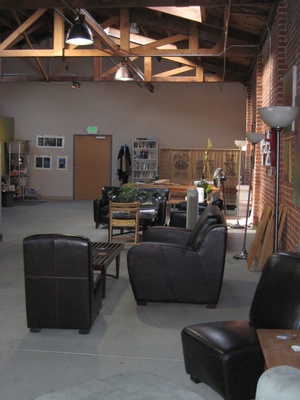 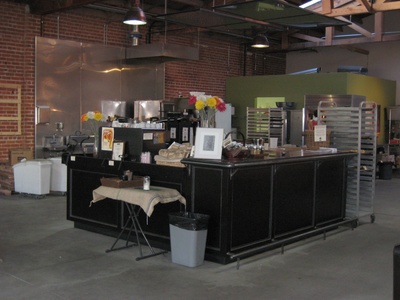 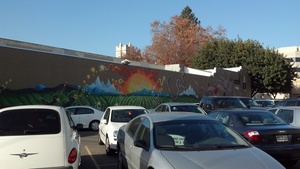 Mural on Old Soul's outside wall

2007-09-23 08:31:31   I knew their coffee was amazing, but I discovered this weekend that their fresh baked cookies are at least as good! I ordered a gigantic chocolate chip and chopped walnut cookie and a cup of dark mocha java, and ascended into bliss. —BrianGingold

Well, I would have agreed with Old Soul's environment being "laid back" until today when I was essentially challenged to a duel by an over zealous OS barista. Here's where I went wrong: I carried a Starbucks cup into OS having walked over with my laptop with my hands full. I know- that was dumb, but honestly, I wasn't thinking. As soon as my boyfriend and I sat down, I realized I had a cup in my hand, and sheepishly put the cup on the ground at my feet instead of trashing it right away. I started setting up my laptop, claiming our place at the table; my boyfriend was settling in and thinking about what he wanted to order, flipping through the paper. The place was not crowded. About 10 minutes later said barista walked over and told us we were scum of the earth. She insisted on calling me sweetheart while she accused me of the following offenses: hiding my Starbucks cup, disrespecting OS, disrespecting her personally, and stealing wifi and well, just sucking majorly. On one hand, I guess I deserved a "Hey, trash the Starbucks cup, dummy." I would have understood and done it happily. My boyfriend and I were clearly embarrassed and apologetic, despite that, she persisted in her smiling belittlement, imploring us to stay, while simultaneously telling us off. I started packing up my bag before she even finished- she seemed to be enjoying our humiliation. Too bad- this place is a sick Sacramento hideaway, and I've recommended this cafe to many friends, but I will not step foot in there again- they're kinda pretentious and I thought the whole scene was a little agro and dramatic for a Sunday afternoon. I didn't mean any harm, OS Barista...sweetheart, chill out and enjoy your weekend!

2010-03-24 17:23:18   My first and last visit here had a five-minute wait in line. That part was fine, but I realized I did not have any cash while waiting. I looked around for signs of either Visa/MC logos, a card reader, or a cash only sign. I saw none, but thought perhaps they were being blocked by the customers in front of me waiting in line. It was only after we'd ordered, drinks were being made, and I pulled out my card that the barista told me, in a somewhat confrontational matter, that they only took cash. I asked, thinking I had missed it, if there was a sign. "ARE WE REQUIRED TO HAVE ONE?" was the snarky response. I was so stunned that I didn't keep my companion for paying for the drinks. Thankfully they were not good enough to compel me to return. —IAmNewHere