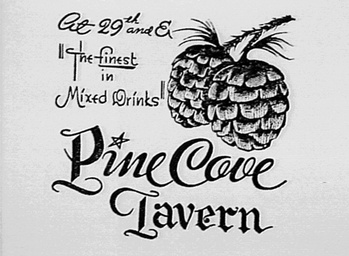 The Pine Cove is a gem of a bar in a wasteland of overpriced, pretentious meat markets. At its present location since 1963 when Interstate 80 was just being built, Pine Cove is a neighborhood bar attracting just enough college clientele and after-work drinkers to pay the bills, and is populated appropriately depending upon your arrival time. It's a rare family-owned institution, passed down from father to sons (then in 2006 from sons to employees), with a full bar and a knowledgeable barkeep. You'll have to maneuver a narrow flight of stairs (memories of Amsterdam!) to access the cove, lodged above Pine Cove Bottle Shop and the Pine Cove Barber Shop. Pray you don't fall down them at the end of the night, but until then, enjoy cheap drinks, free popcorn, a fireplace, electric darts, and the requisite televisions which place the Pine Cove somewhere precariously between corner bar and Froggy's (in Davis). The Pine Cove always has nightly drink specials for the budget-minded (such as top shelf martinis for $2.50!), and reputedly decent karaoke on Tuesdays and Thursdays to appeal to American Idol wannabees. PBR always on tap! It has long been regarded as a "cop bar", it being a favorite hang out of off duty Sac PD.