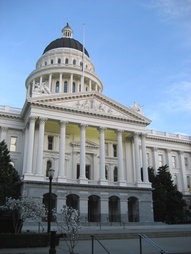 Sacramento was settled in December 1848 by John Sutter, a Swiss immigrant. Sacramento grew from Sutter's Fort, which was established by Sutter in 1839. During the California Gold Rush, Sacramento was a major distribution point, a commercial and agricultural center, and a terminus for wagon trains, stagecoaches, riverboats, the telegraph, the Pony Express, and the First Transcontinental Railroad. Sacramento is California's oldest incorporated city.

Typical of California informality, Sacramento is referred to by many nicknames. The most common names are Capital City, River City (after the Sacramento River and American River), and the City of Trees due to numerous trees throughout the city and along the riverbanks.

The nicknames most used by those living in Sacramento are Sac, Sactown, or Sacto. The river area where Sacramento originally loaded and unloaded cargo ships is still in existence as a tourist venue, and is simply named Old Sacramento.  Much of the current downtown area was built on top of the orignal Sacramento. due to historical floods. 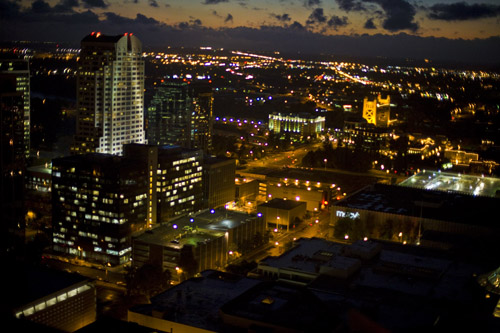 Sacramento at night, taken from the top of 801 K St.

Portions of this article are licensed under the Creative-Commons Attribution-ShareAlike license.  It uses material from the Wikipedia article Sacramento.