Sacramento Critical Mass is a celebration of bike culture where a large group of bicyclists take to the street together and in an ad hoc democracy. There is no set route or ending time, though most rides last anywhere from an hour to an hour and a half. While most rides tend to stick closely to midtown and the Capitol area, past rides have gone as far as Old Sacramento, Alhambra Blvd. and Broadway. Every bicyclist is welcome, and each rider is invited to choose for themselves the reason behind Critical Mass. Pro-bicycle activism, social interaction with other bicyclists, and fun are common reasons to ride.

Critical Mass in Sacramento suffered many starts and stops over the years, usually buckling under pressure from the Sacramento Police Department. The latest incarnation started in April, 2007 and has been steadily growing since. While previous masses met on the State Capitol's west steps, the current version meets at Fremont Park on 16th and P st on the last Friday of each month at 5:30 PM and the ride gets underway around 6:00 PM.

One of the more hilarious (and simultaneously, scary) events in the history of Sacramento Critical Mass was when a random motorist attempted to perform a citizen's arrest on the mass for "impeding traffic." There have been incidents of road rage against the mass, the most infamous documented in this video. Articles about Sacramento Critical Mass ran in the May 29, 2008 issue of the Sacramento News & Review and the May, 2008 edition of Midtown Monthly magazine.

You can see a video shot at a 2002 mass here. Videos from more recent Masses are widely available on YouTube. An extensive gallery of Critical Mass pictures from July 2007 onward is available here. There is no definitive online community for Sacramento Critical Mass, with a Google group, Blogspot blog, Google page, and MySpace profile, all separately maintained. The  http://critical-mass.info site is no longer being updated. 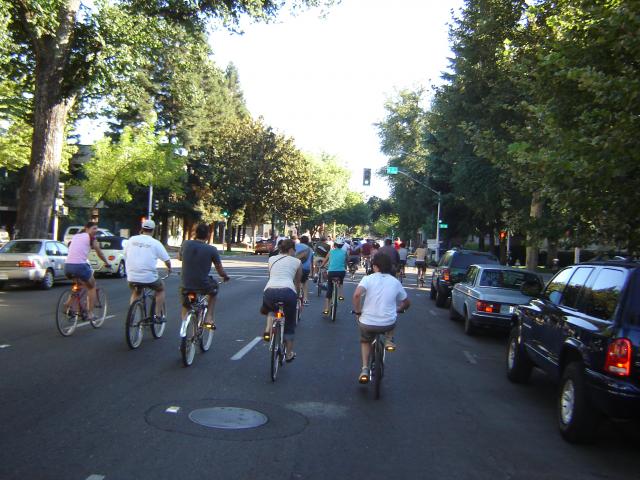