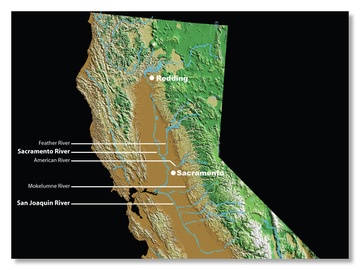 Map based on USGS public domain image The Sacramento River is the largest river in the state of California at 327 miles and drains the northern end of the Central Valley (22 million acre-feet), while the San Joaquin River drains much of the middle third; the two join in the Sacramento-­San Joaquin Delta and empty into the upper end of San Francisco Bay. The Sacramento River begins very near Mount Shasta and meanders south through Chico, passing west of the Sutter Buttes and south before entering Sacramento. From here it continues to the east, where it meets with the American River and sweeps south then finally west to the northern arm of San Francisco Bay. The Sacramento River was the highway into California for emigrants arriving overland, starting with John Bidwell in 1841. Today, the river remains vital to the state's economy and its drainage into the Sacramento Valley basin is a major source of drinking water for the state and is a principal source of irrigation water for Sacramento and San Joaquin Valley farmers.

From the San Francisco Bay, the Sacramento River can be navigated up to Sacramento by ocean-going ships through the Port of Sacramento's deep water channel in West Sacramento. This allows historic recreations of tall ships to travel all the way to the local region. Occasionally whales and sea lions can travel up into the river. Sacramento River paddleboating guide describes river access points for kayaking, rafting, canoeing and innertubing.