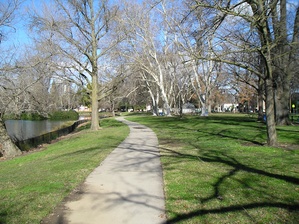 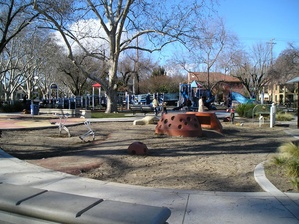 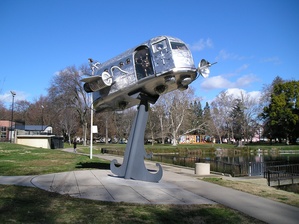 Spaceship sculpture at the playground

Southside Park is located in the Southwest corner of Downtown Sacramento, encompassing the 6 city blocks between T and W streets and 6th and 8th streets. The park itself is arranged around a small central lake, and includes both inner paved pathways near and around the pond and an outer three-quarter mile jogging trail with various recently installed fitness stations. Many mature trees provide ample shade in the bulk of the park, which is otherwise largely grassy.

Southside park is used for a number of activities in addition to jogging and lounging, as it is equipped with courts for tennis, basketball, and bocce, as well as piers over the otherwise fenced lake. These are often used for fishing or watching various waterfowl (many different kinds of ducks are common, but Canada geese, mudhens, and occasional cormorants are also frequent visitors). The park is also home to a community pool run through the City of Sacramento and a clubhouse that provides space for neighborhood meetings and for an active youth program.

The playground at the west edge of the park was fully renovated by the City in 2005, and is of particular note for its size and accessibility. 16,800 total square feet are divided into multiple playground areas aimed at different age groups. The base playground surface for most of the playground is rubberized material that offers a high degree of access to most playground elements via wheelchair. Traditional playground fare (swings, climbing surfaces) is well represented, with the addition of many various sensory features. The playground is space themed, with a sculpture of a spaceship that resembles an airstream trailer with colorful neon lighting. Tables and restrooms are located nearby.

The north end of the park offers the largest expanse of grass and trees, and also features an amphitheatre, the backdrop of which is a brightly colored mural. This end of the park is often used on weekends and holidays for various special events. 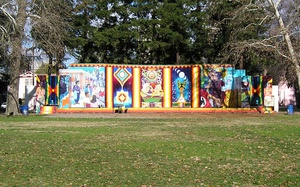 Many special events and community gatherings take place at Southside Park annually, but regular weekly events are more informal. Sunday mornings feature a weekly farmers market across the street under the freeway.

Annual events include the Sacramento Gay Pride Festival, Earth Day, and various cultural gatherings associated with the nearby Our Lady of Guadalupe Church.