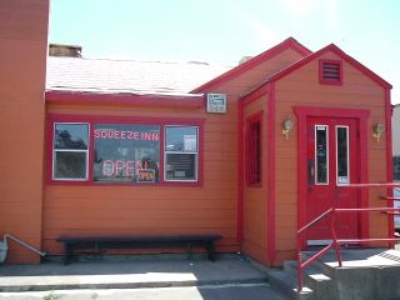 tzhe 2nd Squeeze Inn location, now closed, though the entrance is inside the Power Inn location 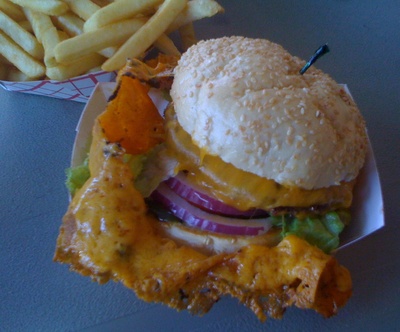 A Squeeze with Cheese, sadly the cheese halo had separated

Squeeze Inn is one of Sacramento's premier greasy spoon diners. Its name is derived from the small building in which it started, where not more than a dozen diners could fit. It was located just north of McKinley Park on C St. near the end of Elvas Ave. After opening in 1980 and quickly garnering a dedicated and passionate following, the the building was demolished in the mid-80s and the location on Power Inn Road (which is often incorrectly identified as the original location) opened. It consisted entirely of a tiny waiting area, a bar that could hold a dozen, and the kitchen. This location closed after an ADA lawsuit. The Squeeze Inn has since done quite well, opening a new location a few hundred feet away from the original, plus several other locations.

The signature menu item is the Squeezeburger, a 1/3 lb. pattie with mayo, mustard, tomato, lettuce, pickles and onion on a sesame seed bun, for $4.80. Adding cheese is another $1.00. The "Squeeze with cheese" comes with a slice of cheese, as well as a large crust of burnt cheese that's half a meal in itself.

The wait can be as long as 45 minutes during lunch. Since being featured on the Food Network, burger enthusiasts visit from as far away as the east coast.

Also on the menu are tacos, pigs in a blanket, turkey breast, and even veggie burgers. Fries, which are sliced unskinned potatoes, go for $2.25 and $2.50 for small and large sizes respectively.

Tank-tops with the motto "Best Burger in Town" can be bought for $15 apiece, and comes in light blue or pink, and L or XL sizes.