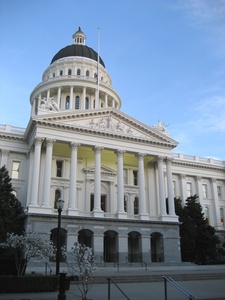 Though the entire Capitol grounds are very scenic, the east side of the Capitol building is home to a massive park/garden area. Here you can find a variety of trees and flowers, including a rose garden and a cactus garden. You will also find a lot of squirrels looking for handouts. They may look cute but there are so many they are more of an infestation due to people giving them food. Please don't feed them.

There are also numerous monuments — to firefighters, to those killed in the Vietnam War, and many more.

The Capitol Museum can be found inside the Capitol building itself, and guides are always happy to show people around the building.

There are a variety of memorials and monuments on the Capitol grounds. A (possibly incomplete) listing from the State Parks website:

North side of the Capitol Building at dusk