The streets of Sacramento may not be the most exciting part of Sacramento, but they are a crucial part of its transportation infrastructure - pretty much the only way to get around without them would be by light rail, Amtrak, or by jetpack. You'll probably use the streets quite a bit, whether you're driving, bicycling, skating, running, or engaging in some other sporty way of getting around. Streets are also where you'll probably park your car (if you're driving). There are several bridges that carry streets across rivers in Sacramento. The Tower Bridge and I Street Bridge both cross the Sacramento River, for example.

California laws apply to Sacramento's streets, of course; matters that are not prescribed by state law are decided by City Council (parking rules, for example).

The grid refers to an area that covers downtown and midtown, in which the streets make a rectilinear gridwork of streets. The north-south streets are numbered: 2nd Street through 30th Street, though the numbered streets continue beyond the grid. There's no 1st street in Sacramento - what might once have been 1st Street is called Front Street. The east-west streets are lettered: B Street through X Street, plus Broadway where Y street would be if Y Street continued into the grid. A Street falls a bit north of the grid proper. It's quite easy to navigate around the grid, but people still somehow manage to get lost sometimes. This is somewhat understandable because there are quite a few one-way streets on the grid. Alleys may also make navigation a bit confusing, since many of the alleys are as wide as streets in their own right.

It would be nice to create a street-by-street listing of the businesses on each block of the grid, like what Daviswiki does - see G Street, for example. - Nicholas Barry 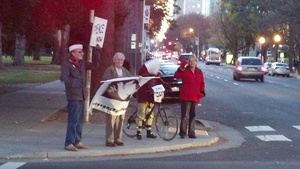 Anti-war demonstrators on 15th and LThe corner of 15th Street and L Street is often used by demonstrators, often protesting the wars in Afghanistan or Iraq. All the streets around the State Capitol get used fairly often for protest purposes, and the streets between the Capitol and Cesar E. Chavez Plaza were recently used frequently by Occupy Sacramento demonstrators.

The Marconi Curve is especially prone to traffic jams, and is one of the few locations with an elevation change in Sacramento (though it's a very, very minor elevation change).

One of the most glaringly confusing instances is the Interstate 80 / Business Loop Interstate 80 mess. Interstate 80 comes in from the west, splits in two (into Interstate 80 and Business 80), then the two reconnect after leaving Sacramento. Why anyone would split a freeway in two, but leave them both with the same number, is a mystery. One of them really ought to be given another number.

Like many other cities, city planners at some point in the past decided it would be a good idea to have lettered streets and lettered avenues. So there's a 3rd Street as well as a 3rd Avenue. The lettered streets all run north-south; the lettered avenues run east-west, starting south of highway 50. And yes, you can stop wondering - there is a place where an avenue intersects a street of the same number. Want to try to find it? Ok, we'll tell you - 24th street hits 24th avenue. To further complicate matters, a few of the lettered streets are mirrored by North versions of themselves across a set of train tracks (north of John Muir Children's Park). So if you're driving north on 16th street, you'll cross C Street, the railroad tracks (there's no B Street at 16th street), A street (which is simultaneously N. A Street), N. B Street, and N. C Street. At this point the north lettered streets have apparently decided they were a bad idea in the first place, and there aren't any more.

Many streets are disjointed - they'll skip over a section of city, then pick up again as if they had never left off. B and C Streets, for example, are particularly guilty of this.

Alleys can also be confusing, if you're not used to a community with a lot of alleys. Unlike the alleys you might find in some cities, alleys in Sacramento can be driven on, for the most part - they usually look like narrow streets. Most of the alleys are named after the streets they're between (like N Street O Street Alley). But some have their own names, such as Carriage Path Way (which is between O and P Streets). The alleys also often present blind corners, making driving down them a bit dangerous (and making bicycling on the sidewalks even more dangerous!).

The Streets of London is not a street, by the way - it's a pub.

Cars/trucks/automobiles/etc. are the main users of streets, but they also share streets with bikes, skaters, and runners. According to California law (citation needed), bicyclists may use the streets the same way cars may use them (highways and interstates excepted), meaning that bikes may ride in the middle of a lane. Some streets also have bike lanes or wide shoulders to make it easy for bicyclists to ride without needing to take up a whole lane.

Bicyclists often feel that streets are too car-centric, and organizations like the Sacramento Area Bicycle Advocates advocate on behalf of the interests of bicyclists - for example, lobbying for the installation of more bike lanes. There's also a monthly Sacramento Critical Mass during which bicyclists try to "take back the streets" by riding in such large numbers that they entirely take over the streets they ride on.

Events in the streets

Some of Sacramento's events take place in the streets themselves. The Sacramento Critical Mass bike ride, for example, is a street-centric event. Sacramento Second Saturday is an art walk and street fair that often closes down automobile traffic on several blocks in Midtown. Protests, demonstrations and marches like the Martin Luther King Jr. March also use the streets. Occasionally Sacramento hosts foot or bicycle races through parts of Downtown or Midtown.

Thanks to a progressive and art-friendly City Government, the streets of Sacramento provide the largest venue in town for live performances. Chapter 5.108 of the City’s general plan encourages the development of arts and culture in Sacramento by exempting street performers, incidental musicians, and establishments that host them from requiring an Entertainment Permit.

City Code regarding using the streets as a venue

5.108.030 Entertainment permit required—Compliance with other laws.

J. Street performers such as musicians, singers or mimes;

S. Any establishment, venue or assemblage of forty-nine (49) persons or less, as described in the maximum occupancy load;

Uses as a Venue

On June 21 the people of Sacramento participate in the Fête de la Musique. On this day musicians around the world and of all abilities are encouraged to make music throughout the day where ever they may be, whether they be solo, orchestral, or somewhere in between.

Performances during Second Saturday events require no permits because of this exemption.

Bands that frequent the Streets of Sacramento