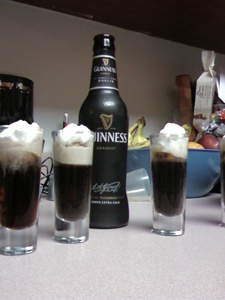 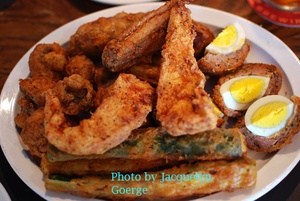 Streets of London is a traditional British pub with a choice selection of beer on tap. Traditional pub grub is served including fish and chips, scotch eggs, bangers and mash, and so on. There is a generally jovial atmosphere. Sunday nights at 9PM is trivia night, with teams pitted against one another vying for amusing inexpensive prizes.

2007-06-11 13:41:42   They get bonus points for serving larger then average cocktails. On the downside, it can take a while to get up to the bar when they're busy. Also on the downside, the men's bathroom is disgusting. If you're using the urinal, look up and you'll see some nasty bugs. Trivia night is always a goodtime. The host has an amazing voice. —CharlesMcLaughlin

2005-07-06 22:48:08   Plus, Trivia night on Sunday. But I find it's very Anglo-centric trivia, and thus, not very fun for ordinary non-british folks. But then again it is a "british"-themed pub. But I'd strongly recommend Fox and Goose as a better option. —JaimeRaba

2008-03-29 15:56:12   Love, love, LOVE this place. Yea it's a pain when it's busy, but it's always a good time. I credit this place for getting me hooked on Guinness. See, before I never liked Guinness, but then a friend somehow got me drinking "Black and Tans" or whatever the hell they're called, but anyhoo I got into dark beer and now Guinness is my fave. —CurlyGirl26

2008-04-07 21:37:20   One of my favorite ways to spend a weekend afternoon is to come to "Streets," order some bangers and mash and down several pints of Guinness with a few friends. It's like a vacation without having to go away. —WILLIAMJTRINKLE