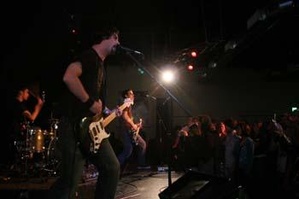 Surefire was an Alternative Rock/Post-Hardcore band formed in the summer of 2000. They were greatly influenced by the Sacramento band Far, as well as Filter, Foo Fighters, and Helmet.

Surefire began as a garage band featuring high school acquantainces Brian Strand and Aram Deradoorian. Their music and lyrics came from Strand's catalog of journal entries and scribbled notes, along with 4 track and MIDI recordings. Surefire quickly became a trio with addition of Strand's longtime friend Brett Martin on bass and the band completed their first demo In My Room by October of the same year.

In early 2001, the band added second guitarist Sam Smith to the lineup to round off the full spectrum of sound they wanted to achieve. While bringing Smith up to speed, Surefire found themselves back in the studio working on their second body of work, Dialone, which was to include 7 new tracks, and re-recordings of the 4 tracks they had previously released. After initial tracking for Dialone was complete, Surefire scratched the previously released tracks as well as 2 of the new tracks, Rise to Fall and Nameless.

In October 2001, the band faced their first major setback, as drummer Deradoorian decided to leave the band and join the Sacramento quintet, Quitter. Despite the setback, Surefire found a near immediate replacement with local drummer Brent Verrett. Verrett's stint in the band was short lived, however, as Surefire and Verrett decided to split after only 4 months. Surefire then recruited former Quitter drummer Donny Quattlebaum, who also split ways with the band after only a few months.

In August 2002, Surefire received a drummer inquiry from Mike Johnston (Simon Says) protege, Shawn Gainer. This proved to be a major transitional point for the band from a songwriting prospective. Gainer's drumming was fresh and exciting and added a great deal to the newer songs that the band was writing. After playing a few shows with their new drummer, Smith decided to leave the band as he claimed it was no longer fun for him and felt that it was becoming too business-like.

In late 2002, Surefire did a preproduction for 9 new tracks, including The New Campaign, which was later released on the 2004 Ascension NorCal Sampler CD. The night of their first on-air radio interview on 98 Rock's Local Licks, Gainer did not show up and ultimately quit as his transition into college left him with too little time to devote to the band. Strand and Martin spent 3 weeks jamming with local musician Scott Caseman and Robbie Nelson before deciding that this addition would change the feel of the music in a way that they did not like. In July 2003, Gainer rejoined the band and they began to get some local recognition including winning a 100.5 FM Battle of the Bands. In July, the band went back into the studio to record the full length album Arrival. Just as the band was getting ready to move to the next step in the local scene, Gainer quit the band... again.

Strand and Martin spent a few months reviewing their options for the future of Surefire. They decided their hard work was not worth throwing away just yet, made flyers, and got a response from Santa Barbara native, Sean Stark. After a few sessions together at the studio, they decided to move forward with the experienced drummer. Their songwriting with Stark was riff driven and the songs took on an aggressive edge. However, the previously written and performed songs lacked the warmth that they had with Gainer at the helm.

In September 2004, Stark broke his right arm. The expected recovery time was 6-8 weeks, however, Stark's recovery lasted 3 months. Near the end of his recovery period, Strand was contacted by Gainer who was interested in a return to the band with a long term commitment. With the uncertainty of Stark's return to the band, Surefire decided to reinstate Gainer as their drummer. They immediately got back to work on an album including some of the tracks they had written with Stark. After playing some high profile concerts to large crowds, including a short regional tour to Southern California, Gainer quit the band... yet again. This time Gainer claimed that he did not have adequate say in what the band wrote and played. 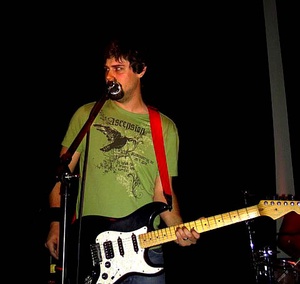 Strand at the final concert, December, 2007

Surefire attempted once more to bring in another Mike Johnston protege named Matt Klee. At 16 years old, Klee was the youngest member to ever be in Surefire. The band continued to play high profile events, including an opening spot for Lorene Drive in April 2006. Surefire seemed to be back on track, but Klee's personal life began to play into his presence in the band, and in April 2006, he was kicked out.

In the final days of Surefire, Strand and Martin struggled through drummer tryouts. They had been spoiled by the emmense talent that they had worked with over the years and were unwilling to work with those that did not match up to their predecessors. Strand and Martin called it quits in July of 2007.