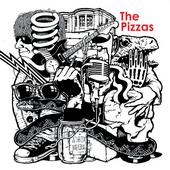 The Pizzas are a Sacramento band consisting of Charles, Matt K., and Christine. They have played at the Fool's Foundation and Delta of Venus, and on 2/5/08 they aired live on Klinger's show on KDVS 90.3FM. They announced an upcoming release, a 45 available for "ten dollars" from Daggerman records.

They are terrible liars, and claim the following is true: