Tower Records was one of Sacramento's most famous homegrown brands, a record store that expanded to nearly 90 locations worldwide before going out of business on Dec. 22, 2006.

Tower was founded by Russ Solomon in 1960; the first location was at Watt Ave and El Camino. Seven years later, the store opened in San Francisco. The chain expanded to more than a dozen other countries, including the UK, Japan, Argentina, and Israel. In 2004, the chain declared bankruptcy.

After the Watt Avenue store closed, the reader board outside said All Things Must Pass, the name of a song by George Harrison but also a commentary on the closure.

The store on Broadway at 16th Street was a local landmark. There Tower Theatre and Tower Cafe live on.

After Tower Records closed down all of their stores, employees at the Sacramento Location put up a banner reading, "Thanks Russ. You're still our hero."

Russ Solomon could not let Tower Records die, so he put together some financing and opened R5 Records and Video at the site of the original Tower Records. R stands for Russ and 5 is his favorite number. The store retains the same signature red and yellow colors of Tower Records. It has the same look and feel but with a new name. 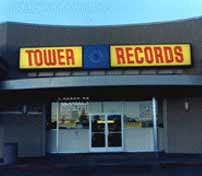