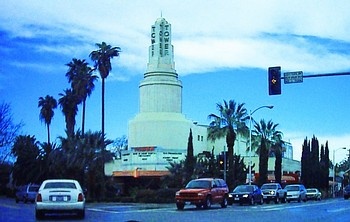 Built in 1938, the Tower Theatre is a Sacramento landmark.

In the 1980s, the single screen auditorium was divided into three smaller ones. The exterior, however, has remained in its original form, including still-working multi-colored neon lights.

Located at the corner of Broadway and 16th Drive. The original theater was divided into three smaller showing rooms, but the exterior remains intact. They specialize in independent and art films, which you don't often see at the local megaplex.

Owned by a New York company that runs "small" art house theaters around the country, they are strictly limited to showing what the main office determines will do well.

Some info and photo originally from DavisWiki.

2008-03-10 14:36:22   It is really nice to have the Tower and the Crest in town so independent films and foreign films are available to those of us who like such movies. Both have deals where you can purchase a group of tickets at one time - 5, I believe - for a discounted price which makes things more affordable as well. —WILLIAMJTRINKLE

2009-06-09 11:29:50   ChipZemple's sentiments are dead-on. The Tower discontinued the enormously successfully dicount card after over 30 years at four different theaters without publicity, notice, explanation, or even a "thank you" to the thousands of patrons who used these cards. The discount card helped nurture and sustain a generation of loyal film-goers, as well as generated a sizable and predictable profit for the theatres in four different decades. Instead, the Tower continues a penurious "bargain matinee" policy avaialable ONLY on the first showing of a movie — sometimes as early as 11 AM!

The Tower management seems to be bending over backwards to alienate their long-standing customer base by making it impossible to obtain conveniently priced admission under any circumstances!

2010-08-29 17:09:09   This theatre has at some point in the last few months transferred ownership (or just management) to 'Reading Cinemas'. This name now adorns the popcorn and soda containers, and there is a new (distinctly cheesey) pre-trailer show. The other change from this is that the Tower Theatre website now redirects to a Fandango page. Other than that, everything else seems to be the same. —KeithBradnam

2011-05-15 16:12:14   Born here. Love the Tower Theater, BUT when Reading subsituted canola oil (ugh!, Yucko,& gag) for real butter, it RUINED the whole movie experience. Heard it was done for the vegans! How many of us are that?! More probably for the $$$$. Huge discouragement! It's BYOButter now. —joanbenedetti