After moving from Davis to Sacramento, Charles McLaughlin quickly realized Sacramento needed its own wiki. Oddly enough, the original motivating factor was to document wireless hotspots where Charles could use his laptop and enjoy a refreshing beverage. Charles purchased the SacWiki.org domain name on May 5, 2007. He met with PhilipNeustrom on May 22, 2006 regarding hosting the Sacramento Wiki on the same server as the Davis Wiki. Phillip had already began work on hacking Sycamore, our underlying wiki software, into WikiSpot, a service that to allows anyone to create their own wiki.

The Sacramento Wiki officially began February 17, 2007, when Charles, Phillip, Brian Gingold and others met in Davis to hack on WikiSpot. For the few weeks that followed, the site was password protected and few people knew about it. Charles, Brian and a few others tried to add as much content as possible before going public. On March 19, 2007 Charles finally got the DNS situation worked out and http://sacwiki.org resolved properly. On April 2, 2007 WikiSpot went live, the password was removed and more people began to hear about the Sacramento Wiki. On April 28, 2007 the Sacramento News and Review published an article on the Sacramento Wiki and we began to see more people creating accounts and adding content. Similarly, The California Aggie published an article on the Sacramento Wiki on May 15, 2007 which again helped get the word out. Since then we've seen a steady increase in editing activity and the project continues to grow.

In October, 2012, SacWiki underwent significant changes to the underlying software, including the addition of a WYSIWYG (what you see is what you get) interface. The change was poorly implemented, with many bugs still remaining as of February, 2013. 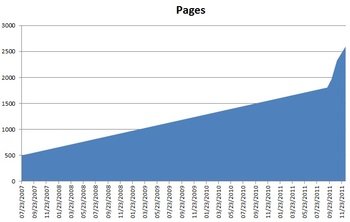 The Sacramento Wiki currently has pages. For perspective, the wiki had...

The Sacramento Wiki also has users. In the past, it had...

February 23, 2013 We are having a meetup about the SacWiki at the Code for America brigade! Help us re-launch the wiki in 2013.

January 12, 2011 Come to a meet-up to contribute to Sacwiki! We'll be meeting every Thursday from 2pm - 4pm at the Sacramento Public Library, Central Branch (828 I Street, Sacramento). We'll meet on the second floor, at the tables to the right of the stairs/elevator. Look for a sign with the Sacwiki logo. Come meet fellow editors, and play around with the new site, which looks beautiful! Check out Wiki Gathering for more details (important as future meet-ups may have different times/locations).

December 12, 2011 Our site is about to get a whole lot cooler - Localwiki has designed a whole new site for us! It will be rolled out in the next few days. Before it's rolled out, want to play with the new Localwiki code? It's up on a test site for Sacwiki. Also, we'll start having community edit days soon - probably in a coffee shop somewhere. Post on the Facebook page if you're interested in coming to one.

November 7, 2011 So far two professors are (or will be) working with their classes to improve Sacwiki. Cynthia Linville's Sac State class has been adding local services & organizations, and Patty Felkner's Cosumnes River College photography class will be taking photographs around town to add to Sacwiki. Service learning at its best! (There are more professors we're talking to - more news soon!)