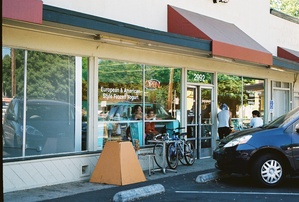 Yogurtopia was a hip dessert spot in Land Park that opened in June 2007. They served both normal and "european style" frozen yogurt in a self-serve assembly line style. They had a bevy of fresh fruit and exotic sugary toppings to choose from. You paid at the end by weight. Founded by Kevin Standfield and Dave Ferris, Standfield left to found Yogurt Monkey in 2008, according to Bob Shallit's July 29, 2008 column in the Sacramento Bee. Yogurtopia closed in early 2009, according to the April 28 Retail Watch column.

2009-05-31 14:07:44   I was excited to try this yogurt place today, so imagine my dismay after driving 20 mins to get there, to see that it has closed down. My consolation prize (cake from Freeport Bakery next door) almost made up for it. —BelindaRogerson