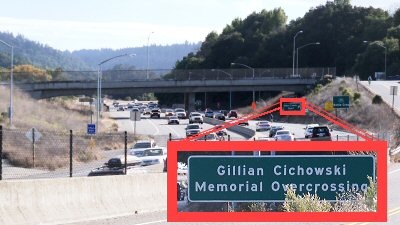 Gillian Cichowski died in a accident, with her two children who survived, at this location in 1992. This is one of the few highway constructions in California named for a woman. The overpass was in response to a campaign by friends of Gillian Cichowski to make the intersection (with Bear Creek Road) safer. Gillian Cichowski (nee Casson) was an Englishwoman who had married an American and, having settled to bring up a family in the Los Gatos area, had become very active and involved in the local community. She was much respected as President of the Parents' and Teachers' Association at Lexington School, and the naming of the overpass for which she had previously been a campaigner, was a great tribute to her memory The overpass was open to northbound traffic July 18, 1996 and opened to southbound traffic August 29, 1996.

Margaret Green of Sunnyvale, California died in a similar accident near the same location during overpass construction.

There is also a Gillian Cichowski Volunteer award in Los Gatos. 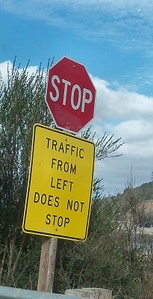 Warning that the traffic across the overcrossing can still be hazardous.