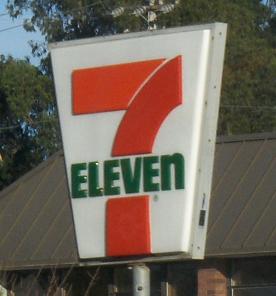 7-Eleven is a popular convenience store chain, with many locations worldwide, mostly in the United States and Japan.  7-Eleven was started by Southland Corporation in 1926.  In 2005, the Japanese franchise of 7-Eleven, Seven & I Holdings Co., bought control.  The fuel stations at selected 7-Eleven stores (Citgo) used to be owned by Petróleos de Venezuela S.A., which is controlled by the government of Venezuela.  7-Eleven decided to end their contract with Citgo in 2006, and now sells gas under their own brand name.  There are eleven locations in Santa Cruz County:

Most 7-Elevens don't vary much in their selection of goods, store layout, or much else, really.  One exception is that the 7-Eleven on Cardiff Place stops selling alcohol at 11pm each night.  The reasoning behind this is that there is a resident who lives across the street who has actively complained in the past about noise from college kids on booze runs late at night.  Somehow the management struck a deal that supposedly solves the problem, which includes stopping selling alcohol after 11pm.  Store employees have indicated that once this individual isn't around anymore, they will resume selling alcohol at all hours.

There is a Citibank branded ATM at every 7-Eleven store.  Some of them accept deposits.  These ATM are actually operated by a company called Cardtronics, but Citibank pays Cardtronics to put Citibank's brand name on the ATM. This allows Citibank customers free access to these ATMs.