The current Bank of America logo. 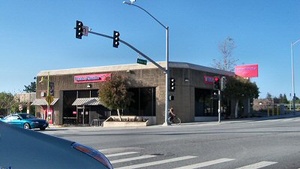 The River Street Branch of Bank of America.

Bank of America does provide support, grants, and donations to local organizations and charities. In 2011, the bank awarded Community Bridges $7,000. The bank also sponsors various local events and community efforts to assist in fundraising for local causes.

1240 Soquel Avenue, Santa Cruz - closed before the 1980s. Operations were transferred to 1414 Soquel Avenue, which was subsequently consolidated to the River Street Banking Center.

9486 Highway 9, Ben Lomond - closed sometime in the 1980s. Opened originally in 1970 according to the Santa Cruz Sentinel, operations were consolidated to the newly built, permanent Scotts Valley Banking Center.

1134 Pacific Avenue, Santa Cruz - closed before 1994. This was Bank of America's first Banking Center in Santa Cruz County, and was in operation for over 70 years. In 1982 this location was offered Historical Landmark status.

1414 Soquel Avenue, Santa Cruz - closed sometime between 1997 and 1998.  This was the Santa Cruz Main Banking Center, after the Pacific Avenue branch. Operations were consolidated to the Banking Center on River Street, which was formerly a branch of Security Pacific Bank (acquired by BankAmerica in 1992).

806 Ocean, Santa Cruz - Closed circa 2010. Operations were consolidated to the Banking Center on River Street. 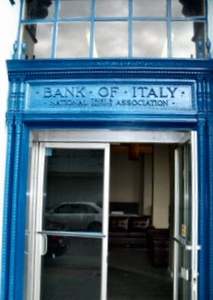 Building on the corner of East Lake Avenue & Main Street in Watsonville still has the Bank of Italy logo. When the name changed in 1930, the old logo was covered. 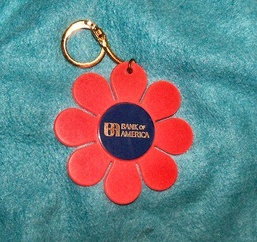 This flower keychain from the 1960's shows the old Bank of America logo.

The building at 1134 Pacific Avenue, in Santa Cruz still has a  Bank of Italy logo over the doorway. It was a Bank of America branch for over 70 years. It is now a grocery store. You can see it and another closed branch of Bank of America at the Former Bank Buildings listing.