There are two roads in the county named Bay Drive. The map to the right shows Bay Drive in Santa Cruz.

Bay Drive in Watsonville is one block long. It is a connector street between Harkins Slough Road and Vista Pointe Drive. It is residential. 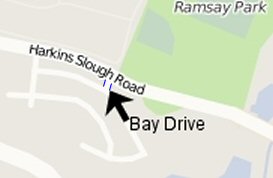 Bay Drive in Santa Cruz has bike lanes in both directions of travel.  Generally, traffic can get pretty congested, especially during rush hours, from university traffic.

There are a few bus stops between High Street and Escalona Drive in Santa Cruz.

None on Bay Drive in Santa Cruz