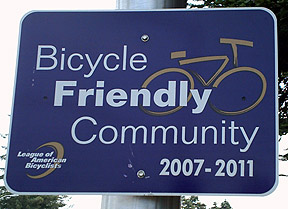 Santa Cruz has a large number of people who use bicycles as a primary mode of transportation, but taking to the road without a little bit of knowledge and preparation is probably not a good idea. Here are some general tips for riding in town:

Note: Contrary to what the above guide says about traffic signals with video detection, you need to be in the traffic lane to be able to be detected.  The City of Santa Cruz has repositioned these camera to view the traffic lanes in order to detect automobiles and NOT towards the bike lane area for detecting bicycles, as when it was originally installed.